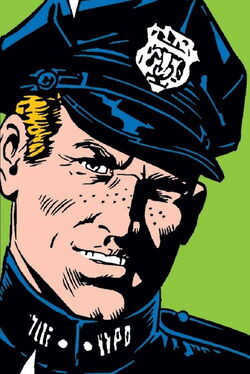 A Chicago native of Irish descent, Bill Nelson grew up to become a police officer. Fresh from the academy and on his first official day as a beat cop, he bumped into college co-ed Greer Grant as she dropped her coins for the bus fare. While Greer's friend Jeannie did not care much for Chicago cops, as Bill requested she referred to him as a policeman. Upon meeting Greer, the two were quickly enamored, and Bill promised to meet her later.[1]

After their second meeting, the two went on numerous dates, and Bill would always be the assertive one taking her along. Whenever Greer attempted to assert herself, he'd take control and be the commonplace "man" in the relationship. Following Greer's second year of college, she dropped out to marry Bill and the two moved into a new home. As time went on, Greer wished to do more such as help with home upkeep and maybe return to college for a career income; but William was against it as he wanted a full-time wife.[1]

Despite his attitude for a stay-at-home wife, Greer still loved Bill and waited for him every day he was out on patrol. One midsummer night, exiting the cinema, Bill attempt to halt a robbery suspect while off-duty, but was gunned by a second perpetrator out of his sight. Bill died of blood loss in Greer's arms.[1]

Following Bill's death, Greer felt unable to make it on her own, so she sold the house to return to the city.[1]

Bill Nelson possessed the average capacity of a human male in his mid-20s.

Even years after his death, his widow, Greer Grant, named her first child in his honor.

Like this? Let us know!
Retrieved from "https://marvel.fandom.com/wiki/William_Nelson_(Earth-616)?oldid=5674543"
Community content is available under CC-BY-SA unless otherwise noted.