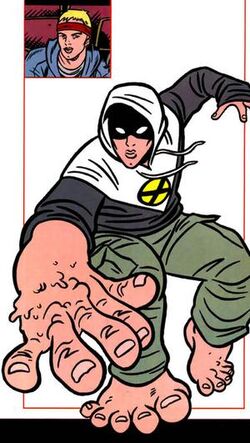 Phat grew up poor and involved in the gangster life. At first, his powers manifested as simple weight gain, which he put down to the stress of his life. Once it became clear he was a mutant, he trained well and used his abilities to fight crime, even before joining the new X-Force. Once rich, he tried to give his family what he never had growing up. He gave them a house, but they still lived in the RV, they liked the closeness.[citation needed]

Phat's first outing resulted in a fight with the old X-Force, who did not agree to the use of the name or the methodology of the team. His first mission saw the death of two his teammates, Saint Anna and Bloke. Bloke would not be the first gay member of the team.[citation needed]

Phat worked with Vivisector to raise their profile amongst the team and in the public. They even 'pretended' to have a romantic relationship which was foiled by the fact both of them realized they really were gay. They had a real relationship, which ended when they realized they were simply not attracted to each other.[citation needed]

Phat's powers seemed to be less effective in moments of stress. During a mission in space, he found it hard to recover from a biological spike that had wounded him.[citation needed]

Phat joined with the team when they went to fight the Taliban on a mission to rescue the cast and crew of a reality show they had captured. He came into conflict with the team when he saved new member Henrietta Hunter. The entirety of the team had come to dislike her because she was interfering, annoying, more famous and even as Phat claimed, 'white', though he was white too. Phat claimed he saved her on instinct.[citation needed]

Soon after this, they confronted the murderous cult lead by Mister Code, who believed he could improve America's general attitude by random sniper killings. Spike Freeman, then team leader, was revealed to be in league with Mister Code; he had hired the man to kill Lacuna, an ally of the team. The Orphan killed Spike and via Dead Girl, they tracked down Code. The enemy killed Henrietta Hunter and was killed by the Orphan. This set off a biological bomb. Phat enlarged himself and enveloped it. The explosion killed him.[citation needed]

Phat was buried in a gigantic coffin. Hunter, who wished to gain revenge for her -first- death, would involve Phat from beyond the grave. An insane ghost, she was causing the odd deaths of anyone who hummed a newly released song she had performed. X-Statix believed they had solved the problem but El Guapo, another member of X-Statix, hummed it and was impaled. Dead Girl, who could come back from bodily destruction, hummed it on purpose. Phat's foot, blown off in the Code explosion, rocketed out of the sky and into her brain. This was only a temporary inconvenience and Dead Girl learned enough to put Hunter to rest.[citation needed]

Fat Growth: Phat could stretch the fat deposits in his body, making his body larger and fatter. He could make them grow in a certain area. For example, if he were to focus it into his fist, he would have a giant-sized fist.

Like this? Let us know!
Retrieved from "https://marvel.fandom.com/wiki/William_Robert_Reilly_(Earth-616)?oldid=5839965"
Community content is available under CC-BY-SA unless otherwise noted.