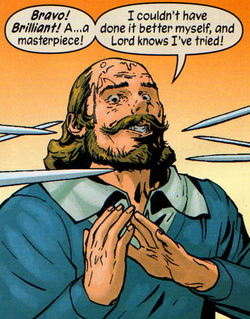 William Shakespeare was a English playwright, who served the court of Queen Elizabeth I and then King James I.

While working on the play Macbeth for King James I, who had misconstrued the original play into its recognizable depiction, Shakespeare was kidnapped by Vulture-Fliers and forced into chronicling Count Otto von Doom's journey to the advanced city of Bensaylum. Fortunately, the Fantastik Four followed Doom to rescue the playwright. Ultimately, Shakespeare and every participating parties arrived at Bensaylum. In the city, Shakespeare was overjoyed of the city's culture and hoped to tell this to his friend Francis Bacon of the "New Atlantis". While there, Doris Evans befriended Shakespeare and even used him in a attempt to won back John Storm from Rita. After Bensaylum was destroyed, Shakespeare went back to England and joined by Doris, who has been writing plays with him, in which he only earns the credits due to the position of the sexes during the 17th century.[1]

Like this? Let us know!
Retrieved from "https://marvel.fandom.com/wiki/William_Shakespeare_(Earth-311)?oldid=5681281"
Community content is available under CC-BY-SA unless otherwise noted.