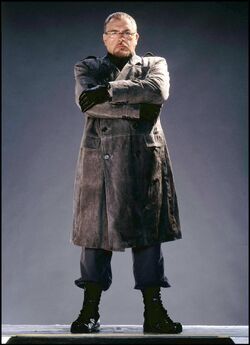 William Stryker was a Major in the United States army and served in the Vietnam War as a helicopter pilot. He was the son of William Stryker, Sr.. Stryker sent his son Jason to Xavier's School for Gifted Youngsters in hopes of ridding his mutation, regarding it as a disease that he believed needed be cured. Xavier had no interest or belief in 'curing' mutants, which angered Stryker. Additionally, Jason continued to grow angry, resentful and vindictive towards his parents; he tortured them by planting illusions in their brains until his mother committed suicide by drilling a hole into her own brain in order to "bore the images out". Stryker then gave his son a lobotomy to make him more docile and kept him cryogenically frozen. Unable to cope with his wife's death, Stryker vowed to eliminate all of mutantkind.

Stryker recruited Victor Creed and Logan to join Team X after they were discharged by the military when Creed killed a commanding officer. The team existed for an unspecified amount of time, but it is known that in their last mission Stryker tried to learn where adamantium came from. Logan left after Stryker ordered Creed to execute the witnesses. Stryker and Creed continued to work together for years.

After Logan left Team X and returned to Canada, Stryker tasked Kayla Silverfox with keeping an eye on him; she only accepted because they were holding her sister, Emma, hostage. During their six years, they resided together in a cabin high in the mountains, and she manipulated him into a state of complacency with her mutant power of persuasion, calming him through the nightmares of the past.

Some fifteen years before the Liberty Island incident, Kayla and Victor Creed faked her murder with hydrochlorothiazide for William Stryker so he could trick Logan into participating in his Weapon X project. After Logan was left for dead by Victor, Col. Stryker persuaded Logan to undergo the adamantium bonding process. Logan insisted that he wanted new dog tags that read "Wolverine", in tribute to a story Kayla told him. The process was successful, and Stryker hoped to erase Logan's mind and use him for the XI, but Logan heard this and escaped.

When General Munson tried to shut Weapon X down, Stryker killed him. Stryker also kidnapped mutants and brought them to Three Mile Island in order to pass their abilities onto Weapon XI. The others escaped with Kayla and Kristin and Logan while Logan and Victor battled Weapon XI. Weapon XI was defeated, but Stryker shot adamantium bullets into Logan's head, giving him amnesia. He pointed the gun at Kayla, but Kayla used her power of persuasion to order him walk until his feet bled. Stryker unwillingly did so. Later, he was detained for questioning by military police in connection with General Munson's murder.[1]

15 years later Col. William Stryker Stryker used a fluid from Jason's brain to control mutants, such as Nightcrawler and Deathstryke. He was the mastermind behind an assassination attempt on the president by a brainwashed Nightcrawler. Stryker had his troops raid the X-Mansion, kidnapped several young students and came across Logan once again, revealing that he once knew him.

He captured Xavier and had Jason trick Xavier into using Cerebro II, a reproduction of Cerebro, to kill all mutants. Magneto, wearing a helmet designed to shield against telepathic attacks, was able to reach Xavier while the X-Men were incapacitated by the psychic assault, but then had Jason make Xavier use Cerebro II to kill ordinary humans. At his direction, Mystique impersonated Stryker and instructed Jason of a change in plans, which Jason then communicated to the brainwashed Xavier. Magneto and Mystique escaped, and soon thereafter Storm and Nightcrawler entered Cerebro II and disrupted Jason's illusion, allowing Xavier to break from his control before any humans and mutants could be killed.

Stryker apparently died when an explosion at his base at Alkali Lake destroyed a nearby dam, flooding the base and the surrounding valley. Logan confronted him after defeating Lady Deathsrike. Stryker was stabbed through the arm by his adamantium claws and Logan scolded him for "[taking] his life", although Stryker claimed that he apparently volunteered to have the adamantium placed in his skeleton. He offered Logan a chance to come with him and restore his memories, but Logan chained him to the helicopter and left to help his comrades. Magneto steals Stryker's helicopter after chaining him to a large piece of concrete at the foot of the dam. When the X-Men and the students make their way back to the Blackbird, Logan comes face to face with Stryker one last time, who asked "Who has the answers, Wolverine? Those people? That creature in your arms?". Looking at the young mutant he was carrying to safety, a young boy with a lizard-like tongue, Wolverine stated that he would "take his chances with him". He dropped the dog tags Stryker fashioned for him fifteen years earlier and left Stryker to die at the mercy of the collapsing dam. He screamed that someone will continue his work one day.[2]

Like this? Let us know!
Retrieved from "https://marvel.fandom.com/wiki/William_Stryker,_Jr._(Earth-10005)?oldid=6060569"
Community content is available under CC-BY-SA unless otherwise noted.