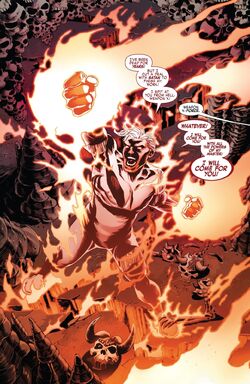 Look around, Pryde. Face my reality. My race is fighting for its very survival. What else do you expect?

William Stryker was a sergeant in the army and may have been involved in the Weapon X Program, which resulted in Logan being given his Adamantium skeleton. While Sgt. Stryker was stationed on a nuclear testing facility, his wife, Marcy Stryker, had become pregnant. After his tour, Sgt. Stryker and his wife decided to visit her parents, in Phoenix, Arizona, but a car crash left them in the Nevada Desert. Marcy went into labor and Sgt. Stryker was forced to deliver the baby himself. At birth, the child was physically mutated and Sgt. Stryker, believing it was a monster, stabbed the newborn. When his wife woke from unconsciousness and asked if the baby was okay, Sgt. Stryker hugged her and snapped her neck. Horrified at his actions, Sgt. Stryker noticed that the car was leaking gasoline and placed his family back in the car, sat in the driver's seat, and lit a match. The car exploded, but Sgt. Stryker was thrown from the car and spared from death. After the funeral, Sgt. Stryker turned to the bottle and was ultimately honorably discharged, after his drinking caused him to lash out at his trainees.

After hitting rock bottom, months after the accident, Stryker was reading a news article, written by Professor Charles Xavier and realized that his child was a mutant. Stryker became convinced that Satan had a plot to corrupt humankind, by taking over their souls while still in the womb, resulting in their mutations. Stryker further concluded that the only reason God would have allowed his son to be a mutant was to direct him to his true calling: ridding the world of mutants. That day, Stryker came to the conclusion that he was saved from the explosion to do God’s work, in destroying all the monsters that Satan created: the mutants.[1]

Driven by this new-found conviction, Stryker then became a popular but controversial preacher and televangelist. While his followers, including a secret paramilitary group called the Purifiers, committed hate crimes against mutants, Stryker arranged a spy to gather information about the X-Men from FBI agent, Fred Duncan. After having a televised debate with Professor X, Reverend Stryker ordered his Purifiers to kidnap Xavier, Scott Summers, and Ororo Munroe and fake their deaths. Reverend Stryker and Phillip Ramsey placed the mutants in tanks and had them hooked to machines that tortured Scott and Ororo and transferred their pain to Professor X. Professor X was hooked to a machine that attempted to turn him against mutants, with illusions of the X-Men killing him and Reverend Stryker saving him. After Professor X was brainwashed, he fired mental bolts at Scott and Ororo, seemingly killing them, and Stryker had him taken to Madison Square Garden, where he was attached to a machine that would use his brainpower to kill all living mutants. In order to stop this scheme, the X-Men were forced to join forces with their nemesis, Magneto. Protected by his psi-shielded helmet, Magneto was able to distract the Professor enough for the X-Men to destroy the machine. Cyclops entered into a televised debate with Stryker about his actions and Stryker pulled a gun, attempting to kill Ariel. Before he could fire, Stryker was shot down by a police officer.[1]

Stryker had been serving a prison sentence as a result of the events of his previous actions. Lady Deathstrike, Stryker's lover and a villain with ties to the X-Men's Wolverine, made her way onto the airplane where Stryker was being transferred. Once there, she killed his guards and rescued him. Stryker immediately began a crusade against the X-Men, focusing on Wolverine, Cannonball, the X-treme X-Men team, and Shadowcat, towards whom he apparently held a grudge.[3]

Stryker sent a group of followers against several of the X-Men, and kidnapped Kitty Pryde. Along the way, Kitty convinced Stryker that mutants were not an abomination, and he seemed to turn over a new leaf.[4]

Stryker returned following M-Day, deeming the sudden massive reduction in number of the mutant population a sign of God, saying "He made the first step and now we have to take the next", basically rallying for genocide on TV.[5] With the help of Icarus, one of the Xavier Institute's students, he caused a bus to explode, killing about 1/4th of the depowered students from the academy.[6][7]

Then he planned the assassination of Wallflower, ordering one of his snipers to shoot her in the head. Next he tried to kill Dust, though X-23 foiled the attempt by dressing in Sooraya's clothes and taking the bullet herself.The deaths of Wallflower and Dust were Stryker's prime objectives, as he had been informed by Nimrod that both girls would be fundamental in the destruction of his army.Finally he attacked the institute with his "purifiers," killing Quill, leaving Onyxx and Cannonball critically wounded, and hurting Bishop, Emma Frost and other students.[8] After Stryker's Purifiers were defeated, he was killed by Elixir.[9][10]

Stryker was later resurrected by the Purifiers using Technarch technology and controlled by Bastion. He has re-assumed control of The Purifiers now combined with the Sapien League. When Bastion located Hope Summers and Cable, he dispatches the Reverend and his Purifiers to eliminate them. They are intercepted by a group of X-Men with the help of a "weaponized ritual" weapon, he is able to take Magik out of the fight. He also temporarily neutralizes Nightcrawler's' teleportation. With the X-Men unable to teleport at will, they are surrounded by the Purifiers. Sensing the battle has shifted and no longer in their favor, Wolverine instructs Angel to transform into his Archangel persona. He was able to quickly dispatch of the Purifiers, and killed William Stryker by slicing him in half.[11]

Several years later, Revered Stryker was somehow brought back to life with a robotic body.[2] As the director of a new incarnation of the Weapon X program, Stryker set its sights on the eradication of mutantkind with the creation of deadly Adamantium cyborgs. These cyborgs were created from regular humans Stryker lured into his cause.[12] As part of the process to refine their cyborgs, Weapon X targeted several mutants with special abilities of their interest, namely Logan, Sabretooth, Warpath, Domino and Lady Deathstrike.[13]

Once Weapon X captured Lady Deathstrike and harvested genetic material for their cyborgs, they sent their robots after the remaining four targets. While they failed to capture Logan and Sabretooth, they acquired tissue samples.[14] Meanwhile, Warpath was successfully apprehended.[15] By the time Weapon X's cyborgs attacked Domino, Logan and Sabretooth had joined forced to investigate their attackers, and managed to rescue her. In order to improve the resistance and strength of the cyborgs, Weapon X's scientists convinced Stryker to set his sights on the Hulk.[16]

Even though the cyborgs that attacked the Hulk managed to have a blood sample sent to their command center before being defeated and forced to self-destruct, their attack prompted Cho to investigate the situation and join forces with Weapon X's other targets. Data retrieved from a partially preserved cyborg allowed Hulk and his new allies to determine the location of one of the cyborgs' production centers.[17] When said facility was raided by Hulk and the mutants, Stryker had it self-destruct, killing its employees in the process. The mutants and Hulk survived, and even managed to rescue Warpath and Lady Deathstrike from containment.[18] With the Hulk's blood sample still in their possession, Weapon X moved to the creation of mutant-Hulk hybrids.[12]

After further investigating Weapon X, Hulk and the mutants located and raided their central command. While evacuating, Stryker was intercepted by Sabretooth, Logan and Lady Deathstrike, who attempted to kill him. Stryker's life was saved by the Hulk, as the young hero was unwilling to let any of his allies kill around him.[19] That brief dispute between allies gave Stryker enough time to complete his escape.[20] After the escape, Stryker started tracking Weapon X's rogue Hulk-mutant hybird named H-Alpha to regain control of him. He sent out Weapon X cyborgs to retrieve him, but H-Alpha killed all the cyborgs and badly injured Stryker before fleeing. Stryker was found by the Weapon X team and the new Wolverine. With his robotic body too damaged to move, Stryker agreed to tell them everything they needed to know in order to defeat H-Alpha.[21]

While the mutants were fighting H-Alpha, Sabretooth stole the nuclear reactor which powered his team's ship and intended to use it on their enemy.[22] He additionally strapped Stryker's torso with the intention to kill two birds with one stone. When Creed joined the brawl, Stryker's torso was lost in the confusion. He resurfaced in Nebraska not long after that, having grafted the limbs he was missing to his torso and started a small church which was quickly gaining new followers.[23]

Having determined that God didn't support his anti-mutant propaganda, Stryker's church becoming satanic and engaged in uses of dark magic.[24] One key new follower Stryker managed to acquire for was Mentallo, who was able to mind-control numerous mutants into doing Stryker's bidding as sacrificial members his cult.[25]

Weapon X-Force was lured to the cult by Monet, who'd fallen victim to Mentallo. The X-Force team successfully freed Monet, along with all of the mutants who'd been formerly brainwashed by Mentallo, which seemingly brought down the Church of Human Potential. Stryker was the last one standing but wasn't willing to go down easily.[24] Weapon X-Force and the army of mutants attacked Stryker and succeeded in killing him, but he noted his pact with Hell and vowed that he would return to kill them. The other mutants fearfully abandoned Weapon X-Force to deal with Stryker while they agreed to take the fight to him in Hell.

Weapon X-Force eventually made its way to Hell with Azazel's help,[26] and stormed the castle where Stryke's resided. Sabretooth had the team return to Earth after realizing that Mentallo was proceeding with a ritual to bring back Stryker to the land of the living, and he stayed behind to fight Stryker himself. Their battle was interrupted when Creed learned that Mentallo had overpowered his team, and had Azazel return him too. After a fierce battle, Victor was knocked by Mentallo into the sacrifice pit, becoming the last sacrifice Stryker needed to be reborn. However, as he descended to Hell, Creed managed to decapitate Stryker, effectively destroying his soul and ending him for good. Instead, he used his sacrifice to revive his son Graydon, whom he'd found earlier and promised to get home.[27]

Like this? Let us know!
Retrieved from "https://marvel.fandom.com/wiki/William_Stryker_(Earth-616)?oldid=6489408"
Community content is available under CC-BY-SA unless otherwise noted.