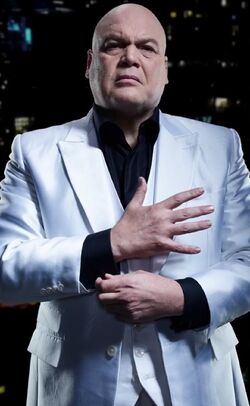 I always thought that I was the Samaritan in that story. It's funny, isn't it? How even the best of men can be... deceived by their true nature. It means that I'm not the Samaritan. That I'm not the priest, or the Levite. That I am the ill intent... who set upon the traveler on a road that he should not have been on.

As a young boy, Wilson Fisk lived with his parents, Bill and Marlene Fisk. His father was indebted, having borrowed money in an attempt to win the elections for 3rd council district, believing it could change his life for the better. Wilson was heavily abused by his father, who wanted him to make something of himself. Among the mistreatments received from his father included inspiring him to drink alcohol at age twelve, and forcing him partake in an assault on a neighbor in retaliation for insulting both of them. Wilson had the most emotional support from his mother, something Bill disapproved of.

One night, as Bill was going to meet the man to whom he owed money, Mr. Rigoletto, he forced Wilson to stare at a blank wall in their house until he returned, to think of the man he wanted to be. Before leaving, Marlene scolded Bill for the monetary problems he brought home. Bill reacted violently, punching Marlene and proceeding to whip her with his belt repeatedly. Listening to his father's abuse towards his mother while being forced to stare at the wall, Wilson snapped, grabbing a hammer from a table and confronting his father. Bill taunted Wilson, and was struck on the head by his son when he turned his back. Wilson then delivered several blows to his skull with the hammer, killing him.

Marlene recovered from Bill's aggression and decided to dispose of her husband's corpse. Using a saw, she cut him to pieces. Over the next week, Wilson and Marlene carried bags with the remains down to the river. As people in the neighbor knew Bill owed money to Mr. Rigoletto, they believed he had left town to avoid paying his debt. After his father's death, Wilson kept Bill's cuff-links.

Wilson was later sent to a farm to live with his relatives.[2]

The Kingpin of Hell's Kitchen

Years into the future, Fisk had amassed a fortune as a businessman. When he returned to Hell's Kitchen, he became a criminal mastermind on the rise, taking over the operations of numerous other mob bosses, and allying himself with international criminal organizations, all while operating in the shadows.[3] He planned to take control of their operations slowly, eliminating them so he could reconstruct the city in his image.[4] Every day, he wore his father's cuff links to remind himself the cruelty of his actions wasn't for the sake of cruelty, and that he wasn't a monster like his father was.[2]

Meanwhile, Fisk met Vanessa Marianna,[5] an art gallery curator whom he later started dating. On their first date, Vanessa realized Fisk was more than a millionaire,[6] and on their second date, he revealed to her his plans for the city. Despite this, she stayed by his side.[4]

Later, Fisk caused a series of explosions in the territories of the Russian mob.[4] In the aftermath, a masked vigilante who had been a nuisance for the Russians' operations ended up in an abandoned warehouse with the leader of the Russians, Vladimir Ranskahov, in order to get information about Fisk from him. As corrupt NYPD officers surrounded the warehouse, Fisk contacted the vigilante via a handheld transceiver in an attempt to demoralize him. Fisk admired the vigilante's conviction, and remarked on their similarities, but claimed that they couldn't co-exist. Fisk bid farewell to the vigilante, expecting the NYPD to take care of him, though he escaped after learning the name of Fisk's financier.[7]

With the elimination of the Russians, Fisk's other allies started to distrust him, contributing to their unease at the interference of the masked vigilante, the Devil of Hell's Kitchen. With the support of Vanessa, Fisk decided to make his existence public, giving New York's citizens the impression he was nothing more than a philanthropist worried about his city.[2]

During a charity party, several attendees were poisoned, including Vanessa.[8] This was secretly a plan devised by Leland Owlsley and Madame Gao to remove her from the table and allow Fisk to focus more completely on business.[9] Additionally, Fisk's assistant and best friend James Wesley was found murdered in a warehouse, where he had been shot by Karen Page after he had kidnapped her for investigating and trying to expose Fisk, unbeknownst to him.[10] Finally, the masked vigilante had struck at the drug production warehouse of one of Fisk's associates, costing him large sums of money.[9]

The following day, after Madame Gao had left New York, Fisk confronted Leland, having discovered some irregularities in his records. Owlsley admitted the blame for stealing money from Fisk as well as trying to kill Vanessa before revealing a piece of information to prevent Fisk from killing him: he had kept Carl Hoffman, a dirty cop who could expose Fisk's entire operation, in hiding as leverage. Despite this, Fisk killed Leland out of rage and set out to find Hoffman before he followed Owlsley's orders to surrender himself to the police if he didn't contact him every 24 hours.

After overhearing a corrupt officer talking in the radio about the search for Hoffman, the masked vigilante managed to find and rescue him from a group of dirty cops trying to kill him on Fisk's orders. After the masked vigilante made sure he got to the precinct alive, Hoffman turned himself in. With Hoffman's statement, the names of every single person on Fisk's payroll were revealed, and they were all soon arrested by the FBI along with Fisk. Not only were Fisk's schemes thwarted, but the masked vigilante was able to clear his own name.

However, the FBI transport carrying Fisk was assaulted by more of Fisk's men, who managed to retrieve him. After pinning down the location of Fisk's transport, the vigilante caused the truck to crash, forcing Fisk to abandon it before trying to escape. Fisk was cornered in an alleyway, and after a furious battle he was subdued and arrested.

The next day, the press gave the vigilante who had taken down Fisk the name "Daredevil". Wilson Fisk was taken to Ryker's Island to await his trial for his many crimes, and locked in an empty cold cell alone. Wearing just his standard white prison uniform, Fisk could do nothing but sit alone on his bed, stare at the blank white wall in front of him, and consider his past and his recent actions and begin planning for his eventual return to the city, regaining his power and getting his cruel revenge on those who took away his life and destroyed his plans for Hell's Kitchen.[11][1]

Hand to Hand Combat: Fisk is a skilled hand-to-hand combatant. He uses his considerable size and strength to savagely pummel his opponents.[6] His skill in combat is sufficient enough for him to beat a Russian mobster to death and hold his own against Daredevil. He is shown to be incredibly strong, able to easily pick up and throw Daredevil during their final fight.[11]

Fisk possesses peak human strength. He was seen lifting over 450 pounds (204 kilograms) during his imprisonment at Ryker's Island,[12] snapped through his handcuffs,[1] and he displayed the capability to punch through solid brick (which has a tensile strength of 14 MPa/2,030.53 psi) during his showdown with FBI Agent Benjamin Poindexter. He also broke Poindexter's back.[13] He decapitated Anatoly Ranskahov with his car door.[6]

One of Fisk's only weaknesses is his past and personal life, which brings out his emotions and temper in addition to clouding his judgement. However, this makes him extremely dangerous, as evidenced by instances such as when he strangled Ben Urich for going after his mother,[9] or when he murdered Anatoly Ranskahov for interrupting his dinner with Vanessa.[6] This behavior led him to murder Owlsley for trying to kill Vanessa even though he had already been warned that he had leverage against him. This would ultimately lead to his downfall.[11]

Like this? Let us know!
Retrieved from "https://marvel.fandom.com/wiki/Wilson_Fisk_(Earth-199999)?oldid=5814369"
Community content is available under CC-BY-SA unless otherwise noted.