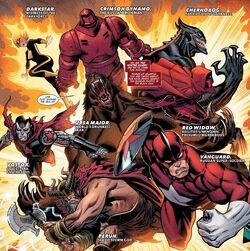 The Winter Guard (Russian: Зимняя гвардия) are a government sponsored team of extraordinary individuals with special abilities. They fight for the people of the Russian Federation and their interests around the globe. The team is formed from members of the Soviet Super-Soldiers the existed before the fall of the Soviet Union and the end of the Cold War.[1][2] They have been described as "Russia's answer for the Avengers."[3]

After the fall of the USSR the newly formed Russia decided they needed their own heroic team to rival the Americans. They merged the People's Protectorate with Siberforce, becoming the Winter Guard.[4] Josef Petkus, the "Red Guardian," became the leader, now known as "Steel Guardian" along with Darkstar, Vanguard, Sibercat, Vostok, Fantasia and Powersurge.[5]

The Winter Guard encountered the American hero Iron Man on his hunt to find the Mandarin. He encountered them mid battle as they were taking on a group of mercenaries. He explained that the Mandarin was responsible for the attacked and asked the them to aid him, but they refused to abandon Russia.[5] Later the Avengers came Russia to aid them in battling Dragon of Heaven. They battled the Mandarin's forces and attempted to enter the Dragon of Heaven, Vostok tried to use his powers to control the vessel, only be taken over by the dragon instead. But Iron Man was able to destroy the Dragon of Heaven.[6]

The Winter Guard, using Darkstar's powers, attempted to save the people in the town of Irkutsk when a mysterious sandstorm hit the town.[7]

The guard battle a group of mysterious aliens in the Smolensk.[8] It was revealed the invasions was caused by the Kree who had now become the Ruul. They teamed up with the Avengers and the other heroes of Earth to fight back.[9]

The Presence returned and planned to re-unite the Soviet Union by transforming its people into a race of zombie-like radioactive beings living under a communal mind. When the Winter Guard and the Avengers arrived he took control of their minds as well. His allies; Starlight, ultimately offered a surrender and used her own power to revive those who had been transformed and remanded herself and the Presence to Russian custody.[10]

The team faced U.L.T.I.M.A.T.U.M. lead by Flag-Smasher in Novosibirsk, who hoped to destroy sovereignty of nations throughout the world.[11]

Crimson Dynamo teamed up with Ursa Major, a new Darkstar Sasha Roerich, and a mysterious new Red Guardian. The new Winter Guard confronted Doc Samson who was in Russia tracking a Hulk-like creature who bested the Abomination and shot and killed him with a giant gun. Iron Man, She-Hulk, General Ross and Maria Hill from S.H.I.E.L.D. were also there examining Blonsky's corpse. They fought the Americans until Ross found a survivor of the battle a little boy who kept murmuring the word "Красногоin" which in English means "Red."[12]

The Guard were sent to Marinmer after an earthquake to protect the interests of Darqon Par. They battled Lady Liberators who also arrived to help. The two battled but during the fight She-Hulk was able to convince Red Guardian that the ruler of the country was dictator and he orders the Winter Guard to stand down and help the people.[14]

Darkstar was killed sacrificing herself to destroy Igor Drenkov; however, Vadim died in battle and was replaced by Galina Nemirovsky as the new Crimson Dynamo. Darkstar was replaced by Reena Stancioff who was given her DNA but also had her latent memories. She was with the team when they faced the Remont 6.[4] The team faced the invading Atlanteans led by Krang[15] But the new Darkstar died fighting Fantasma and the Dire Wraiths. One of Wraiths took the form of Darkstar and the possession of the gem, giving it her powers.[16] It attempted to use the Darkforce powers on the team and the Protectorate, the Wraith was overwhelmed by her personality, resulting in a seemingly reborn Laynia. The teams defeated Fantasma and the Presence destroying the base.[17]

Hyperion came to the nation of Uzbekistan where he began to rampage until confronted by the Winter Guard. Defeating the team, he then found himself face-to-face with Blue Marvel who defeated Hyperion.[18]

They attempted to capture the super-villain group Intelligencia, who used the Zero Cannon on them and sent the heroes to space.[19] They later proved to have survived the experience.[20]

Defenders of the Deep

In response to the increase of global tensions, marked by the Avengers answering to King T'Challa of Wakanda and the formation of the Defenders of the Deep by Namor to drive off human presence in the oceans, the government of Russia revamped the Winter Guard. In addition of Ursa Major being brought back into the team from imprisonment and Dimitri Bukharin returning from retirement to lead the team, the Winter Guard saw the addition of Vostok, the Slavic gods Perun and Chernobog, and the mysterious Red Widow, the latter being tasked with observing the team and reporting to their superiors.

The Winter Guard intercepted the Defenders of the Deep during an attack on Hydropolis in retaliation to Namor's attack against Russian submarines in the Black Sea. The Avengers were already in the scene, and initially worked in tandem with the Winter Guard. In-fighting between Winter Guard members Perun and Chernobog resulted in She-Hulk attacking them, breaking out a fight between the Avengers and the Russian heroes. The battle came to a standstill after the Defenders escaped, and the Red Widow forced Crimson Dynamo to have his team retreat.[21]

Retrieved from "https://marvel.fandom.com/wiki/Winter_Guard_(Earth-616)?oldid=5791464"
Community content is available under CC-BY-SA unless otherwise noted.