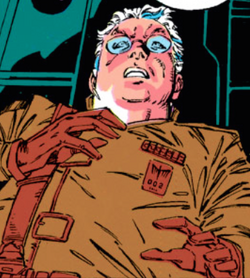 Wipeout was used by the Genoshan Magistrates to control the island's mutant slaves. His power negation made the mutants incapable of resisting when chosen for the Mutate bonding process.[1]

Following the abduction of several mutants by Genosha (orchestrated by Cameron Hodge), several teams of X-Men invaded the island nation. Wipeout, however, was killed by the insane foreign consultant, Cameron Hodge.[2]

Like this? Let us know!
Retrieved from "https://marvel.fandom.com/wiki/Wipeout_(Earth-616)?oldid=5073753"
Community content is available under CC-BY-SA unless otherwise noted.