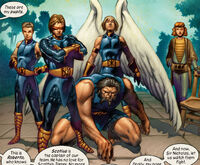 Witchbreed is the term used to described some of the mutants on Earth-311 (the 1602 universe). They are so named because they are believed to be the offspring of witches and the Devil, spawned during a Satanic black Sabbath. Carlos Javier refers to them as Mutantur (Changing Ones)

The witchbreed were considered evil creatures in the year 1602 as Christian and government organizations, most notably the Spanish Inquisition, persecuted them. The young Werner saw his mother die and was nearly killed himself if it was not for Scotius and young Roberto. They regrouped with the rest of the group at Xavier's Select College for Sons of Gentlefolk. Sir Nicholas Fury came to see the new student at the College. Fury was amazed when he met all the students. Fury told Carlos of the danger of having a team of solders beyond imagination.

Peter Parquagh came to the school to warn them about his attack at dawn.

The Grand Inquisitor was a witchbreed himself, as he first used his powers when Brother Tomas was about to kill him. Though he was put on trial for other reasons. When the church discovered he was a Jewish man he was to be burned at the stake. He revealed his powers in public as he was being burned alongside Brother Pietro and Sister Wanda where they then escape and easily killed their executioners.

Retrieved from "https://marvel.fandom.com/wiki/Witchbreed_(Earth-311)?oldid=5552366"
Community content is available under CC-BY-SA unless otherwise noted.