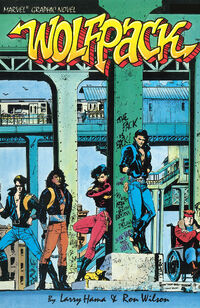 According to the legend, the Wolfpack has existed for at least two millennia, but the latest incarnation consisted of five teenagers from, South Bronx, in New York. The mysterious retired Naval Mr. Mack selected them due to their extraordinary abilities and aptitude.[1]

Mr. Mack trained each of the team individaully from early adolescence into their late teens in hand to hand combat, strategy, stealth, speed, endurance, and raw physical strength. When the time came, Mr. Mack gathered all his pupils and formed the Wolfpack to battle the The Nine and their forces in South Bronx, in New York.[1]

None of the members had experience in team work, but after the death of Mr. Mack and the imprisonment of Samuel Weltschmerz (one of their teammates and Mr. Mack's oldest student), they got together and won their first victory against the The Nine.[1]

Retrieved from "https://marvel.fandom.com/wiki/Wolfpack_(Earth-616)?oldid=4029036"
Community content is available under CC-BY-SA unless otherwise noted.