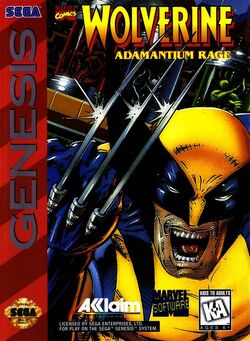 The SNES version follows Wolverine as he receives a mysterious transmission via computer; someone or something has information about his past and arranges for them to meet at an undisclosed location in Canada. It's here where the game's first stage begins; a laboratory teeming with armed guards and sentry robots.

The Mega Drive/Genesis version had a narrative that was a little vaguer in its presentation. Wolverine is shown holding a photograph of someone from his past and expresses his desire for revenge. He then recounts the procedure that he underwent which bonded Adamantium to his bones. It is at this point where the same laboratory level begins without much explanation as to why, or how Wolverine got there.

The rest of both games sees Wolverine chasing down details to his past while meeting and battling several villains and arch-enemies along the way.

Like this? Let us know!
Retrieved from "https://marvel.fandom.com/wiki/Wolverine:_Adamantium_Rage?oldid=5652524"
Community content is available under CC-BY-SA unless otherwise noted.