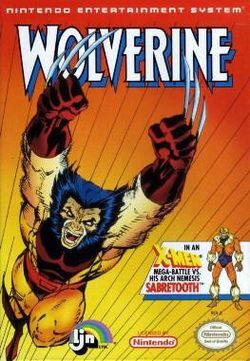 A side-scroller game with similarities to the Mega Man design, including pitfalls, hidden traps, static or linear enemies, and a final boss. There is no real story here. Wolverine must run through a gauntlet to get to the final boss and defeat him.

Jubilee, Havok, and Psylocke only appear at the very end for a one sentence "cutscene" each immediately after defeating Magneto and right before the battle with Sabretooth.

There was a speedrun done on YouTube where this game was completed in seven minutes and eleven seconds.

Like this? Let us know!
Retrieved from "https://marvel.fandom.com/wiki/Wolverine_(video_game)?oldid=5652510"
Community content is available under CC-BY-SA unless otherwise noted.