James, Logan, Patch, Weapon X, Wolverine... Canada, Madripoor, New York, Japan... Krakoa... Names scramble. Time gets slippery. My brain feels bruised black. I don't know when, where or even who I am. But I do know this: I'm an expert on pain.

Appearing in "The Flower Cartel"

Synopsis for "The Flower Cartel"

THE BEST IS BACK!

Wolverine been through a lot. He’s been a loner. He’s been a killer. He’s been a hero. He’s been an Avenger. He’s been to hell and back. Now, as the nation of Krakoa brings together all Mutantkind, he can finally be… happy? With his family all together and safe, Wolverine has everything he ever wanted… and everything to lose. Writer Benjamin Percy (X-FORCE, WOLVERINE: THE LONG NIGHT) and legendary artist Adam Kubert (X-MEN, AVENGERS) bring the best there is to his new home! PLUS: The return of OMEGA RED! 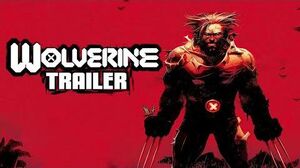 Retrieved from "https://marvel.fandom.com/wiki/Wolverine_Vol_7_1?oldid=5835454"
Community content is available under CC-BY-SA unless otherwise noted.