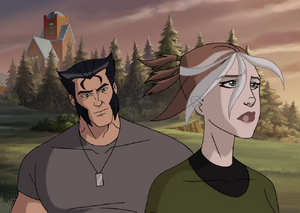 A mysterious explosion destroys the X-Mansion at the moment that Wolverine was leaving. Professor X and Jean Grey are missing, and perhaps gone for good, causing the X-Men to disband. Beast is examining the remains of the explosion and finds out that Professor X was the target.

One short year later, an anti-mutant group called the Mutant Response Division (or MRD for short) hunt Wolverine and arrest a family that helped him. This causes him to go after them with the help of Beast. Inside the jail, they free all the mutants, including Dust, Boom Boom, and Pyro. In the end, Wolverine decides to find the others X-Men and fight the MRD.

Like this? Let us know!
Retrieved from "https://marvel.fandom.com/wiki/Wolverine_and_the_X-Men_(animated_series)_Season_1_1?oldid=6501631"
Community content is available under CC-BY-SA unless otherwise noted.