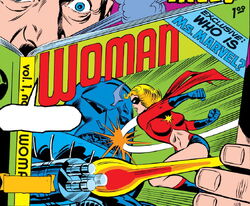 A Women's magazine, part of the Daily Bugle's magazine department. The Bugle suffering from low sales prevented J. Jonah Jameson from being involved with Woman Magazine and controlling its content. As a result, Woman Magazine began printing articles on women's lib, interviews with Kate Millett, and stories about careers for women.

Jameson disliked the content. To him, the magazine should contain new diets, fashions and recipes. Stuff that he thought was useful to women. However, he didn't have time to devote to the magazine in order to "fix" it.

Eventually, Jameson chose to hire Air Force officer turned writer Carol Danvers as the editor for Woman Magazine. However, Carol quickly put her foot down and made it clear that Jameson could just forget about her putting diets and recipes in the magazine.[1] She often clashed with Jameson over the magazine's content.[2] Finally, Jameson chose to fire her. Reluctantly, Tracy Burke took over as editor.[3]

Like this? Let us know!
Retrieved from "https://marvel.fandom.com/wiki/Woman_Magazine_(Earth-616)?oldid=5552388"
Community content is available under CC-BY-SA unless otherwise noted.