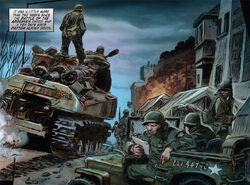 World War II, or the Second World War, was a worldwide conflict fought between the Allied and the Axis powers, from 1939 until 1945. The Axis powers advances was halted in the year of 1942 when Japan loses the Battle of Midway. The formal declaration of the ending of World War II is on August 15, 1945, when Japan unconditionally surrendered to the Allied Powers.

World War II was a global conflict which effected almost every country and person on the planet. The battles took place all over the world but the three main theaters of the war are below;

For the full presentation of this event, please consult the Holocaust page.