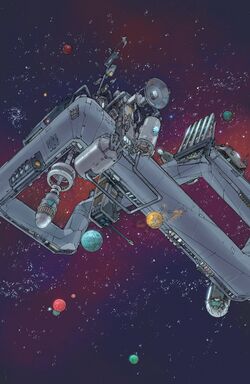 A single glimpse of this advanced technology -- combined with the seemingly infinite amount of it -- leaves no doubt of where we are, Superman. This is Galactus's ship!

Taa II, or Worldship, is the solar system-sized, Möbius strip-shaped home of Galactus, Devourer of Worlds and Ravager of Planets.[citation needed]

After emerging from his incubation cube millions of years after the Big Bang, Galactus consumed the nearby planet Archeopia; this was the first world to fall prey to his insatiable hunger. Galactus felt compelled to create a monument to his dead homeworld Taa, which existed in the previous universe, and to the ravaged planet Archeopia.[citation needed]

Galactus used the remains of Archeopia as the raw material from which he created the enormous Taa II. Construction took millennia to complete, due to Galactus's need to take breaks in search of sustenance. When it was completed it engulfed the entire Archeopian System.[citation needed]

Galactus intended Taa II to surpass any natural world in size, beauty and splendor. Based on accounts from the few beings to step foot in it, such as Mister Fantastic, Galactus easily met his goal.[citation needed]

Indeed, Taa II is so massive several planets and even a star are held captive by its gravitational pull.[citation needed]

This version of Galactus' Worldship resembles a more traditional flying saucer and is where Galactus resides.[2]

Like this? Let us know!
Retrieved from "https://marvel.fandom.com/wiki/Worldship_(Taa_II)?oldid=6255953"
Community content is available under CC-BY-SA unless otherwise noted.