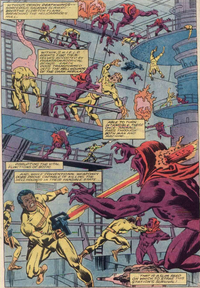 Two groups of Dire Wraiths meet at the United Nations building, after everyone else is gone. The female Witch Wraiths blame the male Scientist Wraiths for the disaster that befell Wraithkind, after their defeat by the Galadorians centuries ago and the scattering of their race across the cosmos. They attack and slaughter the males, proclaiming that sorcery would be the way of Wraithkind going forward.[1]

In the state of West Virginia, Dire Wraiths descend on the town of Clairton, massacring and replacing its inhabitants. Rom and Starshine discover the atrocity and attack the Wraoths. The Wraiths are exterminated by a Skrull extermination squad, which was tasked in hunting the Wraiths and eliminating their kind across the cosmos.[2] After the massacre of the inhabitants of Clairton in West Virginia, the existence of the Dire Wraiths is made known to the U.S. government and the public by Rom in a broadcast. The American government then deploys its military to fight the Wraiths in a secretive war alongside Ron and Starshine.[3]

The Dire Wraiths later launched a devastating attack on the S.H.I.E.L.D. Helicarrier. Which resulted in much slaughter and the near destruction of the Helicarrier, which was prevented by the actions of Nick Fury.[4] In the aftermath the world experienced a wave of attacks by the Dire Wraiths. Every nation in the world experienced Wraith terror attacks via land, sea, or air. In this global campaign of terror, villages and towns were massacred by the Wraiths. The world’s governments join forces against the Wraiths, deploying their armed forces and superheroes.[5]

In the United States, Dire Wraiths (Scientist Wraiths) who survived the purge were attempting to leave Earth. They were indirectly sabotaging the American space program as they used its parts to build a primitive warp capable starship. The Avengers stopped the Dire Wraiths and prevented the malfunctioning ship from devastating the Earth, having turned into an antimatter bomb.[6] Discovering that Forge had invented the Terran equivalent of the Galadorian neutralizer for a U.S. government program to develop a weapon to disable or remove super powers, the Dire Wraiths attempted to kill Forge and destroy his invention. He was saved by the X-Men who intervened, though Storm temporarily lost her powers during the clash after Henry Gyrich hit her with a blast from the neutralizer.[7]

Through their sorcery the Wraiths infect and mutate humans (by infecting the blood supplies in a hospital) and wildlife (via tainted waters). The mutated lifeforms then go on to attack humans. Rom battles mutated humans in Atlanta, Georgia and later with Flight he fights salmon mutated into humanoids and swarms of insects.[8] Using their sorcery, the Wraith attempted a “Worldmerge”. In which they created a Star Disc in Earth’s sky that fired a black magic beam to the sun. It stole it's power and continued to the Dark Nebula, creating a sorcerous tunnel through which the Black Sun and Wraithworld would travel to the Solar System and merge with its sun and Earth. It’s approach resulted in conflagrations and cataclysms around the world. Earthquakes, devastating climatic effects, volcanic eruptions, insects swarming, etc.[9][10] In New York City, the Avengers, X-Men, Avengers West Coast, Soviet Super Soldiers, Defenders, and many other heroes from across the world battle and defeat the Wraiths. The decisive battle occurred in space where Rom, Forge, and an astronaut team led by Gyrich activate an orbiting satellite with a massive neutralizer which Forge was using. It's fired toward Wraithworld, negating the planet's power and banishing the world.[11]

Earth's super heroes gather the remaining Dire Wraiths and a debate ensues as to what to do with them, with some of the heroes advocating the execution of the surviving Wraiths. Rom makes the request to be given the right to decide their fates, as he and his people have suffered the most at their hands and had been fighting them the longest, to which they agree. With the neutralizer he banishes the Dire Wraiths to Limbo.[12] 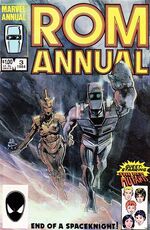 Retrieved from "https://marvel.fandom.com/wiki/Wraith_War?oldid=5444277"
Community content is available under CC-BY-SA unless otherwise noted.