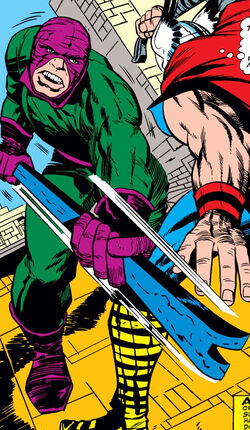 The Wrecker wields a four-foot long cast iron crowbar which has become virtually indestructible through extensive contact with his enchanted skin. The crowbar is a weapon of vast destructive potential.

The Wrecker has used the crowbar to demolish entire buildings in minutes and to hold off the thunder god, Thor, in battle. Because of the teachings of Ulik, he can throw his crowbar and have it return to him, much like Thor's own hammer. The Wrecker has also established a mental link with his enchanted crowbar.[citation needed]

The Wrecking Crew slowly lost their powers if they were for too long away from the Wrecking Bar's range.[2]

In this reality, which is inhabited by anthropomorphic ape versions of Marvel characters, the Wrecker was named the Wrencher and wielded a wrench instead of a crowbar.[3]

Like this? Let us know!
Retrieved from "https://marvel.fandom.com/wiki/Wrecker%27s_Crowbar?oldid=6435881"
Community content is available under CC-BY-SA unless otherwise noted.