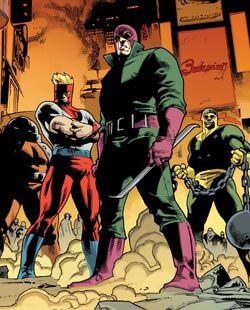 Base of Operations
Mobile; formerly Imprisoned in the Raft, the Vault, the Cage and the Big House
Affiliations

When Dirk Garthwaite, the original Wrecker, claimed his powers by gripping his enchanted crowbar in a lightning storm, a bolt struck the tool as three other men held it as well.[2] Ex-Physicist Dr. Eliot Franklin became Thunderball, Ex-Army Master Sergeant Henry Camp became Bulldozer, and Ex-Farmhand Brian Calusky became Piledriver. Although this quartered the Wrecker's prodigious strength, the team remained together and remained a formidable force. Their powers are of mystical origin, and Thor is one of their common opponents. Their first appearance, however, saw them face the Defenders as they were destroying buildings belonging to Richmond Enterprises while attempting to find a miniature gamma-bomb that Eliot Franklin had lost years before. They were eventually defeated by the combined might of the Defenders and Power Man, and Bruce Banner was able to disarm the gamma-bomb before it leveled New York City.[3]

The Wrecking Crew on a quest to kill Thor were interrupted by Misty Knight and Iron Fist. They take her hostage and force Iron Fist to help them break into the Avengers Mansion.[4] However Iron Fist was met by Captain America and after a brief bit of confusion he agreed to help defeat the Wrecking Crew. When they arrived to gain access to Avengers Mansion, where Iron Fist welcomes them in and shows them a "defeated" Captain America. The Crew walk right into the two heroes trap, when they are lured into the combat training room which is then set to the training sequence made for Thor. With Iron Fist and Captain America in the room as well, the Wrecking Crew are easily defeated and taken off to prison[5]

They were among the supervillains involved in the first Marvel Superheroes Secret Wars.[7][8]

The Wrecking Crew joined the fourth incarnation of the Masters of Evil lead by Baron Helmut Zemo[9] This reformed version of the team took over Avengers Mansion, causing considerable damage in the process.[10] Zemo, a master strategist, was able to play on the Avengers' relationships to pick them off one by one. Zemo sends several of his minions on scouting missions, performing various tasks in preparation for the assault on the mansion. However the Avengers were able to defeat them but with great losses to both teams.[11]

Spider-Woman and the Wrecking Crew are both in pursuit of a stolen computer disc. She searched for the Wrecker to carry out his mother's last request.[12]

They were imprisoned in the Vault, but when they escaped they find the employees of Damage Control. They kidnapped John Porter and his employees were captured by the Wrecking Crew. Thunderball recognized Porter whom he met one day at the Damage Control offices and he convinced the rest of the Crew that they are not worth taking hostage. Captain America soon arrived at The Vault to rescued them and put the crew back behind bars.[13]

The Wrecking Crew has took a hostage, and Code: Blue came to stop them.[14] The British government sends Excalibur to learn the whereabouts of the Juggernaut, and run into the Wrecking Crew. Loki, Ulik, and the Enchantress were also interested in the Wrecker, but for reasons of their own. Thor and Code:Blue race to the scene of the battle, and the Wrecker causes his new abilities to make Excalibur see Thor as the Juggernaut. Shadowcat then turns Thor intangible, phasing him into the concrete and leaving him there.[15] Thor frees himself from Shadowcat's trap, and Lockheed discovers Ulik and the Enchantress on a nearby rooftop. They are forced to flee and the illusion around Thor disappears. Code:Blue captures Bulldozer, but the other three members of the Wrecking Crew got away.[16]

The Wrecker travelled to Yancy Street seeking revenge on Thunderball, who was hiding in the building where the Thing grew up. The Wrecker destroyed the building, killing and injuring the residents. The Thing and the Wrecker battled, The Thing won, S.H.I.E.L.D. agents then took the Wrecker into custody.[19]

They were later imprisoned in the superhuman prison the Cage.[20] They took on the Thing again at a carnival.[21] They attended the wedding of Absorbing Man and Titania.[22]

The Wrecking Crew were shrunken by Hank Pym's Pym Particles and imprisoned in the Big House. Due to their small size it was almost impossible for them to escape.[23]

Later, the group journeyed to L.A. in an attempt to fill the power vacuum left with the defeat of The Pride. The group also included the young son of Piledriver, who now also shared in the supernatural strength of the group.

They battled Excalibur which included Juggernaut in the United Kingdom.[24] also the newly formed Omega Flight in Canada,[25] spending some time in a Manitoba prison before breaking out.[26]

After this, the group was sent to the Raft, where they escaped following Electro's breakout. The Wrecker was captured, but the others remained at large. The Hood, seeking to capitalize on the Civil War, invited a group of villains, including the Wrecking Crew, to join his criminal empire known as the Hood's Gang. After their first defeat by the New Avengers, the group got back together and attacked the New Avengers' base and nearly overwhelmed them, but were defeated by Dr. Strange.[27]

They later attacked the Enforcers, and Mister Fear's other bodyguards. The fight is interrupted by Daredevil who takes out Wrecker and Razor Fist who is also working for the Hood, unintentionally allowing the Enforcers to escape.[28] ... [29] The crew would regular visit the Bar with No Name.[30]

The Wrecking Crew were hired by Jigsaw in order to kill Punisher (Frank Castle) when he was transferred to the Raft by G.W. Bridge. They were promised $50 million if successful. However they were all defeated by the Punisher as he received help from the Rhino who was was sent by Stuart Clarke. The Punisher used Wrecker's crowbar in order to finish off Thunderball.[31]

The Wrecking crew were still members of the Hood's Gang during Dark Reign[32][33] The crew battled Spider-Man and Captain America.[34] They faced Deadpool when he came looking for the Hood. [25] The whole gang goes up against the New Avengers.[35] They also fought White Fang[25]

After they defeated the New Avengers, the Wrecking Crew comes into the fray. Spider-Man and Ronin barely tries to help out but due to their weakened state, they are easily dispatched. The Wrecker then starts poking at Luke Cage but they are stopped by the Dark Avengers.[36] The crew next face off against the Enforcer[37] The Hood reveals to the gang that they had been working with Osborn all along.[38]

They remained imprisoned on the Raft. [44] But later escaped and they encountered many heroes; Bucky, the new Captain America, got into a skirmish with the Wrecking Crew.[45] They encountered the mutant thief Gambit on the Forever City.[46]

Masters of Evil Vs. Superior Six

Lightmaster, set his eyes on Alchemax, and their newest invention; a device which could work in sync with his own light-based powers. Lightmaster hired the Wrecking Crew to steal it, however, Spider-Man thwarted them with his new-found team; The Superior Six.[47] They joined the new Masters of Evil and battled the Superior Six.[48] They remained with the Masters of Evil for a few more crimes.[49]

Dealing with the likes of the Secret Avengers.[50] and Domino.[51]

Most recently, the Wrecking Crew turned up in the employ Mr. Sinister, hired to retrieve the adamantium-encased body of Wolverine from the wreckage of the Paradise installation.[33]

At some point in time, Wrecking Crew were imprisoned by S.H.I.E.L.D. in Pleasant Hill, a prison in the form of a small town where its inmates had their memories and appearances tampered with using a sentient Cosmic Cube named Kobik, so they could be turned into model citizens. When a group of villains led by Baron Zemo snapped out of this fantasy world and returned to their true selves, they attacked the village from within, wrecking havoc and freeing the other prisoners from Pleasant Hill's control.

The Wrecking Crew was one of these numerous villains. When the bad guys took notice of the presence of the Avengers on the scene, they used their numbers to their advantage and mercilessly stroke down the heroes. However, Kobik took compassion on the Avengers and healed them.[52].[53]

The Wrecking Crew aided in Hydra's plan to take over the United States by launching an attack on Manhattan along with the Army of Evil in order to lure out many superheroes as possible. The Army of Evil was later teleported away while Baron Zemo used the Darkhold to boost the powers of Blackout and trap half of Manhattan in a Darkforce dome, trapping the superheroes who fought the Masters.[57] The Crew later took part in a fight against any remaining superheroes in Washington, D.C. as Hydra moved toward the capital to secure its takeover of the country.[58] The Crew also killed off S.H.I.E.L.D.'s Moth Squadron after ambushing them in a warehouse, but the Squadron's sole survivor, Quake, managed to escape with her life after using her powers to bring down the warehouse's roof on top of the Wrecking Crew.[59]

After Hydra took over the United States,[60] the Wrecking Crew along with the Army of Evil were all placed in stasis by Hydra out of fear of what they would do if they were allowed to remain free. When a contingent of superheroes who opposed Hydra's regime known as the Underground launched a massive assault against Hydra in Washington, D.C., Baron Zemo was ordered to awaken the Masters along with the Army of Evil to turn the tide. He was stopped by Black Panther and Winter Soldier before he could accomplish his task.[61] After the Hydra regime fell[62], the Wrecking Crew were likely freed from stasis and taken into custody.

The Wrecking Crew attended a meeting of various villains organized by the Wizard to discuss what to do about Doctor Doom who had unexpectedly decided to become a superhero and become the new Iron Man. As the Hood brought up the idea of forming a gang of villains to take Doom out, Doom suddenly appeared and took down all of the villains present.[63] They later participated in an ambush against Doom along with many of the other villains that Doom had earlier defeated[64] before joining Hood's Gang once more in ransacking Castle Doom in search for Doom's fortune.[65]

Equipment: * Bulldozer Helmet: Bulldozer has a specially-made armored helmet, neck and shoulder apparatus that gives him added protection and invulnerability when ramming an opponent. The helmet partially affects his peripheral field-of-vision.
Weapons: * Wrecker's Crowbar: The Wrecker wields a four-foot long cast iron crowbar which has become virtually indestructible through extensive contact with the Wrecker's enchanted skin. Wielded by the superhumanly strong Wrecker, the crowbar becomes a weapon of vast destructive potential. The Wrecker has used the crowbar to demolish entire buildings in minutes and to hold off the thunder god, Thor, in battle. The Wrecker has used the crowbar offensively as both a throwing weapon and a bat. Because of the teachings of Ulik, The Rock Troll, he can throw his crowbar and have it return to him, much like Thor's own hammer.

Retrieved from "https://marvel.fandom.com/wiki/Wrecking_Crew_(Earth-616)?oldid=5710941"
Community content is available under CC-BY-SA unless otherwise noted.