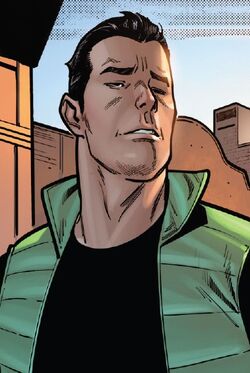 They are not the ordinary native tribe they seem to be!

Wyatt Wingfoot was born on the Keewazi reservation in Oklahoma, a member of the Keewazi tribe[3] of Native Americans and a descendant of the Comanche tribe.[4] Wyatt's father, Will Wingfoot, was the greatest American decathlon champion of his time. Wyatt's grandfather was Silent Fox, the chief of the Keewazi tribe, until his death.[5]

After attending a mission school near Tulsa, Oklahoma, Wyatt Wingfoot entered Metro College, which is across the river from Manhattan. There Wingfoot first met another incoming freshman, Jonathan "Johnny" Storm, who, as the Human Torch, was a member of the team of superhuman adventurers known as the Fantastic Four. Storm and Wingfoot became roommates at Metro College's Northfield Dormitory, and quickly became close friends.[6]

Wyatt then joined the Human Torch in his journey to free the Inhumans from their Negative Zone Barrier.[4]

Wyatt Wingfoot became a good friend to the members of the Fantastic Four and participated in many of their adventures over the years, always proving to be a valuable ally.

Although Johnny Storm did not complete his studies at Metro College, Wingfoot finished his course work there and graduated.[3]

After Chief Silent Fox had been dead seven months, the Keewazi Council of Elders was about to make Wyatt Wingfoot the tribe's new chief.[5] (Wyatt's father had died years before.) However, it was then that the alien menace Terminus arrived on Earth in Oklahoma. Wingfoot met up with Mister Fantastic, leader of the Fantastic Four, and the She-Hulk, who was serving a term in the group, when they came to Oklahoma to investigate. Wingfoot was at their side when they defeated Terminus. As a result of this experience, Wingfoot decided to decline the title of chief of his tribe, at least for the foreseeable future. Having seen and experienced wonders with the Fantastic Four, Wingfoot longed to see yet more of the world outside his village. He accepted Mister Fantastic's invitation to live with the Fantastic Four as a companion. Wingfoot then began a romance with the She-Hulk.[citation needed]

At some point, Wingfoot and She-Hulk separated, while Wyatt was living with the Fantastic Four. After their breakup, Wyatt enrolled in law school at Columbia University, but events transpired that led to him proposing to She-Hulk.

Not long after, he returned to his tribe's reservation accompanied by She-Hulk so she could meet his family, only to discover that the tribe was--once again--in danger from the corporate meddling of a man called Carlton Beatrice who had visited decades before attempting to take advantage of the Keewazi's natural resources.[1]

After learning this, Wyatt, She-Hulk and Wyatt's sister Rain found and fought against Beatrice, but when he stole Wyatt's soul and threatened to destroy it, She-Hulk struck a deal with him--she would give him the basket he had been seeking, which once belonged to Wyatt's parents and had the potential for great power, in return for Wyatt's soul. Beatrice accepted and Wyatt was saved, but now Beatrice had great power and sought to steal the souls of every living being on earth.

He nearly succeeded, but in desperation, Wyatt finally underwent training from his grandmother to learn the art of woman's medicine, giving himself a new form with long hair and traditional clothing. In this form he and She-Hulk united, holding the basket that had belonged to his father aloft in the air, together, and their unity freed the world from Beatrice's grip, returning the souls of the living to their rightful place.

After all this, they could not prevent the Keewazi's reservation land from being seized, their treaty with the government rescinded completely through Beatrice's influence before his defeat. Legally, they had no recourse, and the corporation had powerful weapons not even She-Hulk could hold her own against.

In despair at losing her people's homes and land, Wyatt's grandmother Roberta passed away. In the grim aftermath, as Wyatt's tribe left their stolen land, Wyatt and She-Hulk decided that they weren't ready to rekindle their romance after all, and that Wyatt needed to stay behind with his people after the loss of their homes. They parted on good terms, as She-Hulk returned to New York and Wyatt stayed behind in his new role.[9]

Further Romance with She-Hulk and Friendship with the Fantastic Four

Never apart from She-Hulk's life for very long, Wingfoot occasionally appeared by her side, and they rekindled their intimate relationship over the holidays, when She-Hulk stopped to visit Wyatt on her way to visit her father.[10] A few weeks later, Wyatt returned to New York with her to attend to some business in the city, and stayed with her for some time in her apartment.[11]

For a time, Wyatt accompanied her in her various adventures. Eventually, however, he felt the pull of responsibility and informed She-Hulk that he must return to his home--that he was in fact leaving that night to return to his role as Chief. She understood, and in a fourth wall break, it turned out that her comic had been canceled anyway, so in the end, they were all removed from the page and packed away.[12]

In spite of their separation, Wyatt continued to occasionally reconnect not just with She-Hulk both platonically and romantically, but with his friends at the Fantastic Four as well, especially Johnny Storm. He participated in an archaeology dig near his reservation with both She-Hulk and Johnny,[13] joined them while the Fantastic Force was active,[14] and partnered with the Fantastic Four at least once more when his tribe was once again in danger,[15] among other meetings.

He continued his off-and-on friendship/romance with She-Hulk throughout the years, going on multiple dates with her,[16][17] though ultimately their relationship did not continue and they grew apart, their once-passionate romance evolving into a thing of the past.[18]

Still considered a good friend of the Fantastic Four, Wyatt seemingly roomed with Johnny Storm once more,[19] attended Benjamin Grimm's bachelor party, and was present at the fairly private wedding of Ben Grimm and Alicia Masters.[20]

Wyatt Wingfoot is a formidable hand-to-hand combatant, with considerable athletic skill. He is a brilliant tracker and skilled at training animals. Wingfoot is a fine horseman and motorcyclist and a skilled marksman.

Wyatt Wingfoot possesses the normal human strength of a man of his age, height, and build who engages in intensive regular exercise.

Like this? Let us know!
Retrieved from "https://marvel.fandom.com/wiki/Wyatt_Wingfoot_(Earth-616)?oldid=6559841"
Community content is available under CC-BY-SA unless otherwise noted.