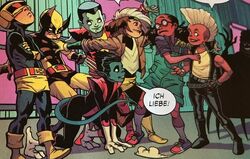 The original X-Babies were X-Men de-aged by Mojo;[4] they were saved by the New Mutants. When the X-Men went missing during the Fall Of The Mutants Mojo set about creating a replacement team from neoplasm. He created several other teams including Gender Swapped and Animal versions until creating the X-Babies. However, he decided they were a bad idea and was about to have them destroyed when they escaped, taking the pilot Ricochet Rita with them.[5]

The group fled in Mojo's Crossover House and in the ensuing battle with Mojo's forces, escaped into Earth-616, with Rita being captured in the process and secretly converted into "The Agent" and sent after them. The group discovered Kitty Pryde on a train and upon startling her awake, Kitty phased out of the train. The group then had to return to Excalibur but had no forms of communication and were being pursued by the Agent, who captured several of the X-Babies but tricking them into signing contracts. They were freed when Kitty removed the signatures from the contracts. They captured the Agent during a fight between him and the X-Babies and Excalibur and Phoenix restored Rita. The X-Babies agreed to return to Mojo if he gave Rita her freedom. The X-Babies returned to Mojoworld alongside Rita as their guardian and had a list of demands that Mojo had to meet for them to return to work.[6]

After Mojo was usurped by Longshot and Dazzler, Gog and MaGog set out to kill the X-Babies. Shower and several others fled to Earth-616 and sought help from the X-Men who protected the X-Babies until Dazzler arrived and ordered the pair to stand down. She allowed the X-Babies to come and lives in the royal palace for their protection.[7]

The X-Babies later helped Wolverine defeat the Warwolves disguised as his teammates and enemies that Mojo II was using to help return the Mojoverse to its television watching state.[8]

Some time after this, they constructed the Clubhouse for Gifted Youngsters in the Umbrella Forest and were lead by Charlie X who was considered their "Big Brother". Here, the X-Babies tried to save the Pix from the Brotherhood of Mutant Bullies. Failing in their mission the X-Babies returned to their base, only to be attacked and captured by Centennials (Parade balloons turned into Sentinels). The X-Babies were forced to take part in a game show designed by Funhouse (an Evil Baby version of Arcade), which included both quiz and deathtraps. The group failed at the quiz sections but were able to beat the traps and were eventually freed by Cyke and Locksteed. Funhouse threatened to turn the Brotherhood back into neoplasm if the X-Babies did not return and they were about to agree to this when Charlie X showed up with reinforcements and saved the X-Babies.[9]

During one of their playpen sessions, Psychilde was involved in an accident that caused her cellular structure to decay rapidly. The X-Babies needed to use Mojo’s machines to save Psychilde. The Mighty ‘Vengers battled the X-Babies, stopping them getting to the machines. However, the ‘Vengers quickly realised that Mojo was a bad guy and so helped the X-Babies, resulting in Psychilde getting a new body.[10]

Retrieved from "https://marvel.fandom.com/wiki/X-Babies_(Mojoverse)?oldid=5838073"
Community content is available under CC-BY-SA unless otherwise noted.