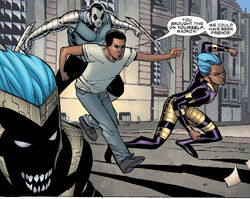 Believing the United States government to be responsible for M-Day, these depowered mutants banded together and decide to execute terrorist acts. This began with sending a booby-trapped doll to the Undersecretary Edward Hutchinson's home on Christmas.[1]

The founder and leader Elijah Cross recruited depowered mutants Fatale, Reaper, Abyss, Callisto, Marrow, Blob,[2] and also received support from The Isolationist, who provided them armory in order to replicate their lost powers.[3]

Elijah Cross was then targeted by the FBI and S.H.I.E.L.D. Cape-Killers, but was mistakenly rescued by Wolfsbane and Rictor, allowing him to flee out.[1]

Following this incident, they sought Quicksilver's aide in being re-powered so they could strike back more effectively. Seeking to use them for his own means, Quicksilver accepted, but only if they would find him a vessel, someone who he could use to channel his Terrigen Crystals-derived abilities through. Callisto tried to warn Elijah but her opinion was rejected.[4]

Later, Blob mistakenly entered into a conflict with Rictor and Multiple Man as he crossed them with a sandwich while he was hungry. he beat up Rictor and was then joined by Fatale who poisoned a dupe. After a brief skirmish, Blob and Fatale fled in a stolen car.[4]

After hitting a pothole left open earlier in the day by Strong Guy and Wolfsbane, Fatale was thrown clear and Blob was left hanging out of the wrecked car, as they were pursued by Siryn and M. Intending to arrest the two ex-mutants, they were stopped by Marrow's arrival, now using knives to replace her powers.[4]

In the ensuing battle, Siryn was quickly injured by Marrow's wrist-mounted knives. While trying to stifle the injured Siryn, Blob was launched clear of the battle. Fatale was knocked unconscious by M. Unnoticed, Rictor was injured from a ricocheted bullet fired by Fatale.[4] The fight ended with Siryn taking out Marrow as, still unnoticed, Rictor was dragged away by Reaper,[4] already repowed by Quicksilver before joining the X-Cell.[5]

While searching for the X-Cell, Strong Guy and and Wolfsbane ran into Abyss who utilized technological whips to throw Strong Guy clear of the battle, Reaper who was trying to transport Rictor to Quicksilver's headquarters, and a knife-throwing Callisto. With Strong Guy thrown clear of the battle, Wolfsbane attempted to tell the X-Cell members what really happened on M-Day but was stopped by Quicksilver, who disabled her with just a touch.[6]

Quicksilver then repowered Fatale, Abyss, Elijah Ross and Rictor. He offered to repower Marrow, but Callisto convinced her it wasn't a good idea (remembering her own experience with Pietro's repowering abilities). As an army of Madrox dupes launched an assault on Quicksilver's headquarters, the repowered members, including Reaper who had been repowered earlier[5] fought back until Elijah Ross suddenly exploded. As the other members began feeling a heat build-up, Abyss snagged Reaper and Fatale, thrusting them into his Brimstone dimension and following them, in order to prevent them from explode in street.[2]

Meanwhile, Callisto and Marrow learned of Quicksilver's role in the depowering of the world's mutants, holding off his future counterparts while Layla revealed the information. After an unseen counterpart of the speedster managed to stab Marrow from behind, Callisto fled with her to the sewers.[2]

The final fate of the surviving X-Cell members was unknown by Madrox and Val Cooper, as well as the status of those who were dragged into the Brimstone Dimension, concerning their powers, whether they froze to that step, remained or were drained, and their current whereabouts are unknown.[2]

Quicksilver ended up captured by cops as a vagabond, and thrown in cell, where he mysteriously recovered his powers,[7] and later accused a skrull from impersonating him being responsible for the stealing of the mists.[8]

The Isolationist revealed his actions for the X-Cell, and tried to destroy the rest of mutantkind, but was stopped by a Terrigenesis-repowered and protected Rictor.[3]

Callisto relocated to the tunnels below Manhattan and minded her own bussiness until teenager runaways started showing up in the subways. She decided to bring them in with her and give them a home with her. This lead to a conflict with her old enemy Storm, who belived that one of the kids, Angie, was kipnapped. After learning the truth, Storm helped them with their power and water problems and let the runaways remain with her.[9]

Marrow was later repowered by Volga at the cost of her unborn child and found by Cable who recruted her as part of his X-Force.

Blob became a weigh-loss guru in Japan and the cast leading actor for Kingo Sunen movie, but joined Magneto and the High Evolutionary.[10] He returned repowered by MGH made from genética material taken from Dlazzer and back fighting for mutant rights among Mystique's Madripoorian Brotherhood.[11]

Fatale, Reaper and Abyss were trapped in frozen time in the dimension, before A.I.M. scientist Terrance Hoffman managed to drag them out using some machine, but captured them, draining them from their energies for his own profit, and leaving them powerless. They were rescued by Serval Industries' X-Factor, composed of Polaris, Gambit and Quicksilver, but once they were saved, they clashed with this last because of the side-effect of the mists, promising him that they would never forgive him and to take revenge on him.[12] When the Corporate X-Factor was first anounced to the public, Fatale interrupted the press conference and claimed that Quicksilver blamed a Skrull for his crimes. Polaris called security, but as she was taken out, Quicksilver told the guard to let her go and publicly admited that it was he, not a Skrull, who stole the Terrigen Mists.[13] It is unknown if the three of them remained as the X-Cell.

Before being repowered, Reaper, Abyss and Fatale used technological equivalents of their powers from The Isolationist.[3] Callisto and Marrow used knives and their training, while Blob used his bulk of skin.

Retrieved from "https://marvel.fandom.com/wiki/X-Cell_(Earth-616)?oldid=6010311"
Community content is available under CC-BY-SA unless otherwise noted.