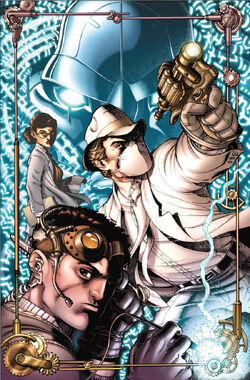 In order to save mutantkind from the effects of M-Day, Beast and Angel had to gather a team of specialists to help them. They gathered Dr. Nemesis (James Bradley),[3] Box (Madison Jeffries),[4] and Dr. Yuriko Takiguchi.[5] After having defeated the Leviathan Takiguchi had activated believing the newcomers to be Russians, the pack returned to Graymalkin Industries to meet their final member, Dr. Kavita Rao, who was formerly trying to cure mutation.[6]

Together, they tried to figure what can turn the X-Gene back on in the depowered mutants. Nemesis brought up pre-mutant DNA from his parents as an example.[7]

They also assembled a time travel device to help them locate Cable and the Mutant Messiah in the far future. However, the devices were only prototypes, brought together in a short time. The side effects included biological acceleration so therefore the travelers would have to return to the present in thirty three and a half hours.[8]

The X-Club went down two members, as Dr. Takiguchi died on Utopia of natural causes,[9] and Beast left the X-Men, grown disillusioned with how Cyclops was leading what remained of the mutant race.[1]

Eventually, the X-Club reassembled, composed then of Kavita Rao and Madison Jeffries. They provided Logan with a cell to lock down Dr. Alba.[2]

Like this? Let us know!
Retrieved from "https://marvel.fandom.com/wiki/X-Club_(Earth-616)?oldid=6489439"
Community content is available under CC-BY-SA unless otherwise noted.