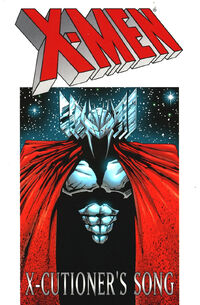 The X-Cutioner's Song is a crossover storyline published by Marvel Comics' in twelve parts from the November 1992 to early 1993. It involved the X-Men (Volume 2), the Uncanny X-Men, X-Factor, and X-Force.

The story starts out with an assassination attempt on Professor Charles Xavier as he is holding a speech at a one world harmony concert by Lila Cheney. To all appearances, the assassin seems to be Cable, the para-militant half-cyborg and former leader of the New Mutants/X-Force. The projectile used during the assassination is infected with a variant strain of the techno-organic virus that infected Nathan Christopher, the son of Cyclops and Madelyne Pryor (the Goblin Queen, a clone of Jean Grey).

While Xavier is rushed to the hospital, Scott and Jean are attacked by the Horsemen of Apocalypse. Caliban, the former Morlock and ally of the X-Men, abducts Scott and Jean while Iceman and Colossus are distracted by War and Famine.

Assuming Cable is the assassin, X-Factor begins a hunt for Cable's team, X-Force. A fight ensues, but it is only when the X-Men join in that X-Force is defeated. X-Force's members are taken prisoner and locked up in the X-Men's Danger Room.

Following a different lead, several X-Men locate the Horsemen of Apocalypse. After dispatching them quickly, they receive a holographic message from Mister Sinister who tells them that he (Sinister) was behind Scott and Jean's abduction. Sinister does indicate, however, that the team should still pursue Apocalypse, because Apocalypse is "A Means to an End" (implying that Sinister knows that Apocalypse can cure the TO Virus)

Meanwhile, back at Xavier's Mansion, Mr. Sinister breaks in, and defeats the X-Men that were left behind (Bishop and Jubilee). He then enigmatically leaves the mansion without any further damage, leaving a note indicating who is the real assassin.

Scott and Jean are transferred from the Horsemen of Apocalypse to Sinister, from Sinister to members of the Mutant Liberation Front, and from the MLF to their leader Stryfe.

Following Mr. Sinister's first lead, the X-Men lay a trap for Apocalypse at one of his safe-houses. Apocalypse defeats them, but decides to not kill them until he can find out who is behind the events.

Mr. Sinister's second lead indicates that Stryfe is behind the assassination attempt. X-Force's leader, Cannonball, offers his help and is allowed to rejoin the X-Men on their hunt for the Mutant Liberation Front (Stryfe's Organization). A combined team of X-Men tracks down the MLF and defeats them, only to find that Stryfe is not with them.

Scott and Jean during this time are forced to endure various forms of torture at Stryfe's hands, although they still do not know why.

Bishop and Wolverine go to Canada to obtain information regarding Cable's whereabouts. They happen to run into Cable doing so, and a battle ensues. Cable assures them that he is not the assassin, and the three join together, and travel to Graymalkin.

Stryfe attacks Apocalypse at his headquarters, defeating him. However, Apocalypse escapes by teleporting away at the last moment. Stryfe assumes leadership of the Dark Riders, Apocalypse's mutant team. Apocalypse travels to Xavier Mansion and offers to cure Xavier (in exchange for their 'services', which could only be their assistance in defeating Stryfe). Apocalypse does cure Xavier by accelerating the virus' replication beyond what it can sustain naturally, forcing it to leave Xavier's body. It tries to feed on Apocalypse, who steps on a manifestation of the virus (presumably destroying it).

Scott and Jean escape from their cells, only to be shown a child that looks much like their son, Nathan. Stryfe tells them that if they are willing to kill the child, it will destroy the Dark Riders, the outpost and Stryfe as well. The truth is that Stryfe is a clone of Nathan, the son sent into the future as an infant to survive a techno-organic virus, created in case he did not survive (Stryfe did not know this, and thought he was the original child, and felt that Scott and Jean had abandoned him). Scott and Jean refuse to destroy the child, and escape only to find out that they are on the moon. As they begin to suffocate in the vacuum, Jean manages to send a telepathic cry for help, but due to the distance, is only able to subconsciously reach Wolverine.

The Dark Riders face the combined forces of all the X-Men, including Apocalypse, and are defeated. The X-Men split up to find Jean and Scott, while Apocalypse goes on his own. Apocalypse runs into the Dark Riders, who defeat Apocalypse and leave him for dead. Archangel confronts the dying Apocalypse and threatens to finish him, but decides it is more fitting to let him die painfully without dignity.

Stryfe meanwhile has baited himself inside a forcefield that only allows members of the Summers family to enter. Jean and Scott are held within, and manage to escape while Cable and Havok (Cyclops' brother) battle Stryfe. Cable has Scott activate a combined Self-Destruct/Time Vortex which consumes both Stryfe and Cable.

Havok reflects that the story began with everyone believing Cable to be the murderer, but in the end he saved them all.

Stryfe's Strike File was the name of a 1993 X-Men one-shot written by Fabian Nicieza and Scott Lobdell. It included several years worth of foreshadowing of Lobdell and Nicieza's X-Men plotlines. The comic has an opening and closing sequence, but was primarily text and picture files.

The issue contains an opening sequence where Xavier is reviewing a disc of data captured from Stryfe. The disc contains profiles of various X-Men and villains from Stryfe's perspective. These collect the profiles written on the 12 trading cards that accompanied the original issues of the crossover, with a number of additions. In the ending sequence, Xavier destroys the disc.

The book contained entries for the characters named Threnody, Siena Blaze, Graydon Creed and Holocaust, who had not appeared previously. Blaze and Creed (as Upstarts) and Threnody would appear later on in Lobdell's run, while Holocaust would not appear in the X-Men comics until the Age of Apocalypse storyline. The version found in this storyline differs from the one found in Stryfe's Strike File in that the Age of Apocalypse Holocaust requires a containment suit, and the Holocaust in the files does not. However, Stryfe's file could've referred to the time in which Holocaust devised a way to transform his suit into human form. 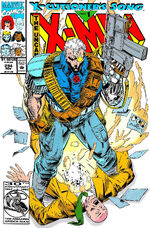 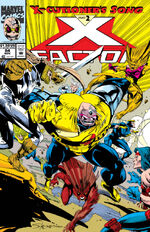 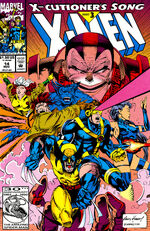 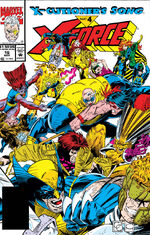 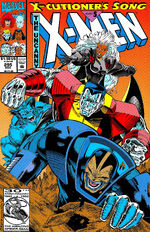 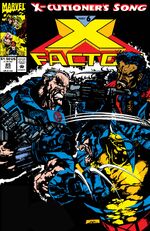 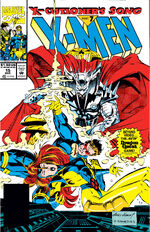 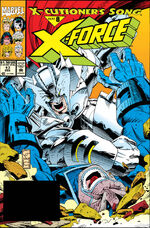 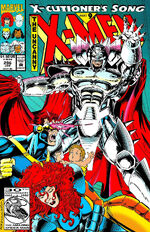 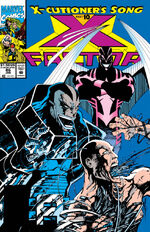 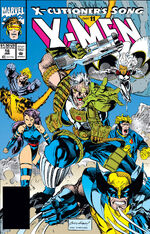 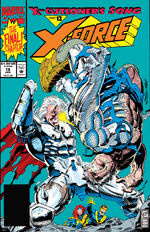 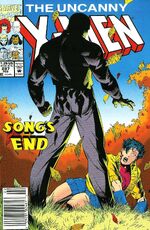 In 1994, a video game loosely based on the story, X-Men 2: Game Master's Legacy, was released for the Sega Game Gear.

Retrieved from "https://marvel.fandom.com/wiki/X-Cutioner%27s_Song?oldid=5190771"
Community content is available under CC-BY-SA unless otherwise noted.