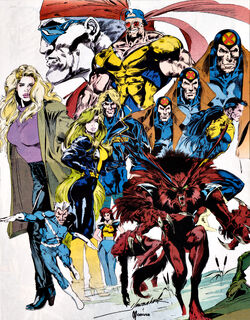 After events on Muir Island, the original members of X-Factor, who were also the original members of the X-Men, rejoined the X-Men. Feeling a need to continue a separate, but government affiliated mutant team, Professor Charles Xavier and Cyclops traveled to Genosha, where Cyclops' brother, Alex Summers (Havok), was rebuilding to atone for his time as a Magistrate. Havok was recruited to lead the team and X-Factor was restarted as new government-sponsored incarnation, with Val Cooper acting as government liaison. Wolfsbane, Polaris, Strong Guy, Multiple Man, and Quicksilver filled out the original roster.[1]

One of the first villains the team faced was Mister Sinister and his lackeys, the 'Nasty Boys'. Sinister hoped to discredit mutant kind and used X-Factor to do so. One of Sinister's behind-the-scenes allies was a power-hungry Senator with the power to cause bad luck. Strong Guy was manipulated into destroying the Washington Monument while fighting Slab, one of the Nasty Boys. The Senator, who was after the entirety of the X-Factor team, was later slain by Mr. Sinister himself.[2]

Quicksilver left X-Factor and returned to the Avengers.

During mission to the island nation of Genosha, one of Madrox's duplicates contracted the deadly Legacy Virus. When reabsorbed, it was believed Madrox himself was infected. The mutant prophetess Haven offered to cure Madrox of the Virus, but the attempt failed and he seemingly died.

While in the South Seas island nation of Madripoor, the team became trapped in a confrontation between Lila Cheney and the alien race, the K'Lanti. Lila had stolen an object of great value, called the Harmonium, during the midst of political chaos. The aliens, after destroying a city block, disperse diamond shaped bombs throughout the city. Despite the neutralization of the bombs and the return of their object, the aliens left behind one last explosive. Strong Guy absorbed the energy of its explosion. Despite releasing it with powerful punches, he suffered a powerful heart attack. He was forced to go into suspended animation.

Wolfsbane left the team, choosing to move back to her home, Muir Island. She joined Excalibur.

Havok was captured by the Dark Beast. After Havok's disappearance Forge assumed leadership of the team. The additions of Mystique and Sabretooth to the team as well as their investigation into the Hound Program caused them to question their role. Sabretooth escaped and attacked the team. They soon moved underground.

X-Factor was sent on a mission to apprehend a mysterious figure who was revealed to be Madrox, alive and well. Madrox unconsciously stayed split into separate bodies, ensuring that the Legacy Virus would be contained in one body and not duplicate into the others. When the infected body died, the shock of its death had caused Madrox to lose his memory. Madrox had been recruited by elements of the U.S. government who wanted to turn him into the ultimate secret agent, training him to become a one-man army. With his memory restored Madrox rejoined X-Factor.

Madrox, Not fully understanding the situation, freed Guido, who continued to suffer. Forge created a device to heal Guido. Afterwards, Guido chose to accompany Lila Cheney and her band in their travels instead of rejoining the increasingly fractious X-Factor.

Havok returned, seeking to combine the team with his Brotherhood allies. Three XUE mutants, Archer, Fixx, and Greystone, came to the past trapped in the bodies of other individuals. They were unable to return to their own time and briefly joined the team. Greystone slowly developed temporal insanity. In an attempt to return to his own time, Greystone built a flying time machine, but due to shoddy craftsmanship and unsound theories, the craft exploded, seemingly killing Greystone and Havok, who was attempting to stop him. However, Havok was actually sent to Earth-1298. The team finally disbanded.

Like this? Let us know!
Retrieved from "https://marvel.fandom.com/wiki/X-Factor_(Government)_(Earth-616)?oldid=5634217"
Community content is available under CC-BY-SA unless otherwise noted.