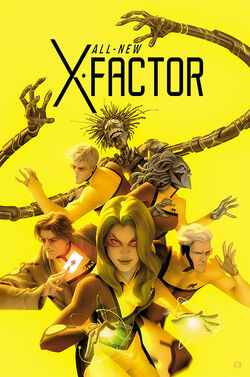 Wishing to create the first corporate owned superhero team, Serval Industries CEO Harrison Snow went about creating a new X-Factor. He first recruited Polaris to lead the team, and purchased the rights of the name from Jamie Madrox following his retirement from X-Factor Investigations. Polaris in turn recruited Gambit, while Quicksilver simultaneously volunteered to join the team.[1]

In their first mission, the three initial members of X-Factor rescued Fatale, Reaper, and Abyss from an A.I.M. base, where they were held hostage and experimented upon by Dr. Terrance Hoffman, a human who extracted their mutant abilities to empower himself. However, the three mutants held a grudge against Quicksilver, who had temporarily repowered them with Terrigen Crystals following the Decimation, a method which had caused their powers to become unstable, and so they departed on poor terms.[2]

Fatale would later return to confront Quicksilver during the team's initial press conference, leading Pietro to publicly admit for the first time that it was he who had used the Terrigen Crystals to bring about harmful mutations in depowered mutants, rather than a Skrull imposter as he had previously claimed.[3] This admission brought him into conflict with his ex-wife Crystal and Gorgon of the Inhumans, but earned him the respect of his estranged daughter, Luna.[4]

Following a hack of the Serval Industries computer system operated by Anton Wexler, X-Factor tracked the theft to the Mediterranean island occupied by the Thieves Guild, whose ruler was none other than team member Gambit. Though Gambit professed ignorance of the crime, he correctly surmised that the technomancer Nil was behind the theft. Traveling to the island, they discovered that Nil had accomplished the feat by mind-controlling Danger, an A.I. formerly with the X-Men.[5] Polaris freed Danger, who had no recollection of her past and attempted to kill everyone present. Following an extended confrontation, and a failed evacuation of the island, Gambit was able to restore some of Danger's memory and personality with a kiss, leading the android to return to Virginia with the team.[6]

A business meeting between Harrison Snow and Lemar Smaug, C.E.O. of Techno, Inc., turned violent when Danger revealed that Smaug was actually Magus, leader of the Technarch, and that he was working with his son Warlock.[7] The team sought out Cypher, Warlock's former partner in the New Mutants, for help in tracking the two aliens to their base in Houston. Although they came prepared for a fight, Magus revealed that their planet had been rendered uninhabitable by a technological virus, and that he was renouncing his species' traditional violence. Following the reunion between Cypher and Warlock, the latter quit Techno, Inc. and both of them joined the X-Factor team.[8]

Like this? Let us know!
Retrieved from "https://marvel.fandom.com/wiki/X-Factor_(Serval_Industries)_(Earth-616)?oldid=5846966"
Community content is available under CC-BY-SA unless otherwise noted.