Over morning coffee with his husband, Kyle, Northstar has a sudden realization that his sister, Aurora, has died. He speeds to Arbor Magna and demands that The Five resurrect her. Hope scolds Northstar for trying to jump the line and points to the hundreds of mutants gathered outside who are all waiting for someone they care about to enter the resurrection protocols. The Five press Jean-Paul to find proof of Aurora’s death and suggest that Sage may be able to help.

Sage finds a record of Aurora leaving the Green Lagoon and traveling through the Krakoan gate to Vancouver a little less than a week ago. Before Sage can even finish, Northstar flies to the Green Lagoon and asks Blob, the bartender, if he remembers Aurora being there. Polaris overhears from her seat at the other end of the bar and tells Northstar that he needs to change his approach. Lorna suggests getting a team together to investigate mutant deaths and disappearances. As she and Northstar leave the Green Lagoon, they discuss who they could recruit. Daken, drunk on the floor of the bar, mumbles that he is available, but Polaris and Northstar dismiss him and fly off. As they take to the air, Lorna says she thinks Prestige and Prodigy - who has just been resurrected with his powers - might be free to help.

Later, Polaris, Northstar, Prodigy, and Prestige (with her warwolf Amazing Baby in tow) meet at the gate to Vancouver. They are joined at the last minute by a persistent Daken - who says he wants to help because Aurora is hot - and a very enthusiastic Eye-Boy. The group crosses into Vancouver, where Prodigy follows Aurora’s week-old social media trail to a motel in nearby Bellingham, Washington.

At the motel, Daken goes to talk to the timid man at the front desk while the rest of the group searches the room Aurora stayed in. They find no leads to suggest where Aurora went next; however, Prestige reminds them of her chrono-skimming power. Rachel psychically explores Aurora’s movements through the room, using objects Aurora touched to stay on her trail. Rachel gives Amazing Baby a hairbrush with Aurora’s scent and the team follows the warwolf out of the motel. Daken catches up to them and shares what the clerk told him after some pheromone manipulation - that Aurora met up with the same man several times the week she stayed there.

Amazing Baby leads them to the mangled guardrail of a bridge outside of town. Prestige tells the team that Aurora’s car went into the river below and asks Eye-Boy to look for SUVs under the water. Eye-Boy points out the locations of several SUVs and Polaris pulls each one out of the river. Eventually, the car with Aurora’s body in the driver’s seat hovers above them.

Seconds later, Northstar appears in front of the Five in Arbor Magna and drops Aurora’s corpse at their feet. Hope and Egg ask Jean-Paul how she died, but Northstar loses his cool. The rest of the group appears behind him and says that after Northstar sped off, they found further evidence of what happened on the bridge. Daken reassures Northstar that no one there is his enemy, then takes Aurora’s body to the Healing Gardens for Dr. Cecilia Reyes to conduct an autopsy. Meanwhile, Polaris calls her father and lets him know they have information the Quiet Council should hear.

Two hours later, Prodigy and Polaris present the results of their investigation to the Quiet Council: That morning, a human named Eddie Avidan - a man with a history of anti-mutant posts online - was found dead in the Puget Sound. He had been struck by his own car when it crashed through the guardrail of the bridge outside Bellingham, with Aurora behind the wheel. Further examination of Eddie’s car - prompted by Daken’s enhanced senses - found the brake line cut and caltrops in the tires. The team’s working theory is that Eddie sabotaged his own car knowing Aurora would be driving it, but waited in the wrong place and accidentally wound up in the vehicle’s path as it careened out of control. Given that they still don’t know why Aurora was in Washington in the first place, Prodigy petitions the Quiet Council to reform X-Factor Investigations. The Five seconds the request, as resurrections could be better prioritized if there is a team dedicated to finding proof of mutant deaths. The Council approves the petition and Polaris’ request that Northstar lead the new team.

After the meeting, Magneto pulls Polaris aside and suggests that she’s missing an opportunity by ceding leadership of X-Factor to Northstar. Polaris tells him she’s simply trying to figure out who she is, and flies off. Lorna lands in an open field and asks Krakoa for help building something. In a rush of raw power, she pulls minerals from the Krakoan landscape and constructs a huge tower. Exhausted, Lorna falls asleep.

The next morning, the rest of X-Factor arrives and each member claims space in the impressive building, which Daken christens The Boneyard. That evening, Forge and Sage brief the team on the new protocol for missing persons - Sage will get an alert if Cerebro has been unable to create a mutant’s backup for a month, and if she can’t find signs of the mutant’s movements through the gates, X-Factor will be notified to open an investigation. Forge has also created “fleet seeds”, which Krakoans can speak into to send cases directly to X-Factor. As soon as Forge finishes explaining the system, dozens of fleet seeds float into The Boneyard. Northstar orders his team to “get to work”.

By the grace of The Five, the resurrection protocols can bring back any fallen mutant. But such a huge enterprise isn’t without its problems and complications… When a mutant dies, X–Factor is there to investigate how and why to keep the rules of reincarnation. Writer Leah Williams (AMAZING MARY JANE, X–TREMISTS) and artist David Baldeón (DOMINO, WEB WARRIORS) take Northstar, Polaris, Prodigy, Eye-boy, Daken and Prestige into the world of murder and missing persons… 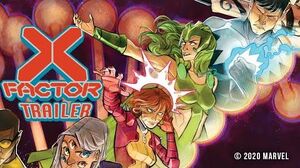