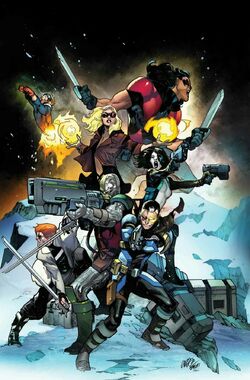 X-Force was born from the team known as the New Mutants and created by the mutant known as Cable. After most of the New Mutants went their separate ways, Cable reorganized the team, which originally consisted of the Cannonball, Boom-Boom, Warpath, Shatterstar, Feral, and Domino (Later revealed to actually be the shapeshifter, Copycat).[1]

Where the other X-teams believed in protecting humans from evil mutants, X-Force adopted a proactive attitude towards mutant terrorists. Cable's basic philosophy, which he related to his team, was "Get them before they get you". X-Force was involved in attacks on mutant groups such as the Mutant Liberation Front and was itself branded early in its career as a group of terrorists.[2]

Siryn and Spider-Man aided the team when Black Tom and the Juggernaut attempted to bomb the World Trade Center in New York and Siryn remained with the team.[3]

When Cable's clone, Stryfe, made an assassination attempt on Professor Charles Xavier, he was in the guise of Cable. Assuming Cable was the assassin, X-Factor and the X-Men hunted X-Force. A fight ensued and X-Force was defeated. X-Force's members were taken prisoner and locked up in the X-Men's Danger Room for a time. They were later released after learning that they had no idea of the whereabouts of Cable and that they could help with the search for the Mutant Liberation Front.[citation needed]

X-Force continued its status as an outlaw band of mutants, dodging both their enemies and the government agents of Operation: Zero Tolerance.[citation needed]

X-Force recruited Pete Wisdom to train them for a time. X-Force apparently disbanded shortly after the new team that would eventually be known as the X-Statix swiped their name without permission. Several former members went on to join Professor Xavier's X-Corporation.[citation needed]

When the first new mutant baby was born since M-Day, Cyclops ordered the reforming of X-Force. Wolverine led the team to hunt down Cable and the new born mutant. Later, Cyclops secretly organized a new X-Force, with all of the best trackers at his disposal.[4] This team operated with a similar philosophy as the old one, that of targeting potential threats before they had the chance to become dangerous. Instead of simply targeting evil mutants however, this incarnation of X-Force targeted any potential threat to mutantkind. [citation needed]

The team was disbanded by Cyclops after its existence came to light, and after Hope Summers returned to the present. However, Wolverine secretly continued to run X-Force with several new members, all of whom were hardened killers. This incarnation of the team was eventually disbanded as well, after Wolverine killed his own son. [citation needed]

After returning from the future, Cable began hunting down members of the Avengers he believed posed a threat to Hope Summers. Racing against time, Cable tried desperately to assassinate the Avengers before the Techno-Organic Virus overtook his body. He was stopped by Cyclops and Hope, who was able to completely heal him with the Phoenix Force, but also put him into a healing coma.[5]

Cable was brought to Utopia to heal,[6] but during the Phoenix Five's battle with the Avengers, he left unnoticed.[7] He then sought out Forge in China to help him.[8] He later recruited Doctor Nemesis, Domino and Colossus to reform his vigilante X-Force. As a side-effect of being cured of the techno-organic virus, Cable was having visions of the future, and assembled the team to help him stop all the disasters he foresaw.[9]

After the disbandment of his previous team, and the "Alexandria Incident", an attack on a defence symposium in the city of Alexandria, an incident tied to a mutant, Cable decided to create a black ops team to protect the interests of the mutant "nation". To this end, he recruited Psylocke, Doctor Nemesis, Fantomex and Marrow.[citation needed]

After their former leader was killed by a younger version of himself, Domino and the rest of the original team got back together in order to exact justice by finding the younger Cable. They managed to find him and Deathlok in the country of East Transia where they thought he was supplying futuristic weapons to the Transian government.[10]

Retrieved from "https://marvel.fandom.com/wiki/X-Force_(Earth-616)?oldid=6031699"
Community content is available under CC-BY-SA unless otherwise noted.