We Sentinels are humanity's trump card against the mutant threat. You'll be the last generation of Homo superior. Everything you've ever feared huddling in your pathetic little refuges... is coming to pass. Commander Ekatarina Gryaznova

Oklahoma
A truck barrels down a dark Oklahoman interstate highway as a woman walks right in front of it. The truck driver, Spencer, slams on his brakes hoping not to hit the woman who turns out to be a disoriented Domino. He stops just a couple feet in front of her and runs to find out what is wrong. She tells him she is not sure and thinks that someone did something to her as she feels stitches on the back of her neck. She then collapses in front of the truck driver.

New Mexico
A Zero Tolerance transport carries it's mutant prisoners to an unknown location. The soldier talk about the commander being an "ice queen" and very mean. She overhears them and tells them to get back to work. They talk about their mutant cargo and she then announces that they will be making an unscheduled stop at 0500 hours.

Missouri
Sunspot, Siryn and Moonstar cannot figure out what has happened to the team at the Xavier Institute as well as their other teammates that were captured by the Zero Tolerance soldiers. Danielle tells them both that they do not need to use Cerebro to locate their friends and that she will instead use S.H.I.E.L.D.'s help to stop the Sentinels and Bastion. She contacts G.W. Bridge and asks for his help and tells him that he owes her.

Xavier Institute
Prime Sentinels and Zero Tolerance soldiers scour the grounds of the Xavier Institute. In the sewers below the property, Caliban and Cable both hide. Cable tells Caliban that he must go above to fight and Caliban must stay in the tunnels. Caliban is scared and Cable reassures him that he will return.

Detroit, Michigan
Sledge monitors Warpath's progress through the interdimensional gateway. Risque then enters and asks Sledge how everything is going with James. Sledge tells her fine and then the equipment flatlines. Sledge begins to call out to James to see if he can hear him at all. On the other side of the gateway, James cannot hear or see Sledge and does not know anything is wrong. He continues to broadcast to him through his microphone in case he can hear though and tells him that he is in the other dimension.

New Mexico
Commander Gryaznova tells the soldiers that it is time for their unscheduled rendezvous and after they try to argue that it is against protocol, she uses a neural leech against them to wipe their memories of the encounter. Outside the vehicle, three doctors approach with their equipment in hand. The commander greets them and tells them that they need to work quickly. They then run quick experiments on the unconscious mutants. One of the doctors reveals that he experimented on Sunspot in the past. They also reveal that they helped save the commander from her coma and set her up to become a Prime Sentinel to exact revenge on Domino.

Other Dimension
James opens his eyes to realize that he is laying on the ground. He looks up and sees his childhood cat, Coyote, standing in front of him. Coyote begins to talk to him and James thinks that he is hallucinating. Coyote tells him that he is going to take James to the other human in the area that James is there to save. Nearby, the Vanisher floats above a number of dogs and reads to them from a large book. James announces that he is there to save the Vanisher and the dogs turn to attack him.

New Mexico
X-Force flies in their PACRAT to the location they were given by S.H.I.E.L.D. They find the Zero Tolerance transport and attack the doctors and commander inside. Commander Gryaznova then transforms into her Prime Sentinel form and attacks. The doctors flee the scene to avoid being detected. The commander and the two battle hard and Moonstar finally shoots one of her arrows into the commander's head and brings her down.

Oklahoma Diner
Domino tries to contact Cable at the Xavier Institute and learns that all the mansion's lines are down. The patrons try to reason with the truck driver who picked her up that it is unsafe to pickup hitchhikers. He tells them that she needs his help and she returns to the table. He asks her if she is okay and wants to make sure she is not going to hurt herself. She tells him it is not suicide he needs to worry for her about, but revenge. 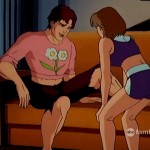