Marvel Database
Register
Don't have an account?
Sign In
Advertisement
in: Dawn of X, Comics, X-Force Vol 6,
and 102 more
English

View source
watch 01:25
Jurassic World: Dominion Dominates Fandom Wikis - The Loop
Do you like this video?
Play Sound
Part of the Dawn of X event

3 - Every Mutant Ever Variant

Domino attempts to infiltrate a meeting of an anti-mutant organization. All of the masked attendees are presented with knives and ordered to submit to a blood test to ensure there are no mutants among them. The leader, dressed in a white suit with a sleeve that matches the peacock tattoo on his right hand, sets the example by slicing his finger and letting blood drip onto a device. Domino hesitates and, though she tries to fight her way out of the room, is captured by the group’s massive enforcer.

Beast is collecting samples in the Krakoan forest when a ferocious animal pounces on him. Wolverine, who had been tracking the creature, chases it off and scolds Beast for not being more aware of his surroundings. Wolverine says that Krakoa has made the mutants feel too safe and worries they’re all going soft.

Elsewhere on the island, Black Tom Cassidy, Krakoa’s head of security, is interfacing with the “green”. He receives a warning of an unidentified boat off-shore and goes to investigate. He finds a crowd gathered on the beach watching a damaged boat lurching to shore with the Marauders on board. Marvel Girl hovers above the crowd and telepathically tells Black Tom something is wrong. Cassidy raises a bridge of land from underwater that allows help to reach the boat. Kate Pryde tells Jean that they have a number of Russian mutant refugees on board who were attacked with chemical weapons. Colossus, who was sent to Russia as an envoy, is also on board and badly wounded, his steel skin severely damaged. Later, Jean probes Colossus’ mind as he lies unconscious in the Healing Gardens and sees him protecting a child from gunfire in a cornfield.

A missive from the desk of Charles Xavier describes Krakoa’s official and unofficial responses to countries that do not recognize the new nation’s sovereignty. Officially, Krakoa will use propaganda and regular visits from envoys to keep pressure on these governments to sign the treaty. Unofficially, Krakoa will establish black market relationships for the sale of Krakoan medicines while using operatives to extricate mutants from these countries.

As Xavier readies to step through a gate to Sokovia, he asks Sage to check her database for any sign of Domino. Sage finds nothing over the week since her most recent Cerebro backup. Xavier is greeted by the president of Sokovia at a ceremony to celebrate Sokovia’s signing the treaty with Krakoa. Xavier sips champagne that, unbeknownst to him, contains a small electronic device.

A group of mercenaries takes control of a trans-Pacific flight in midair, killing everyone on board with a gas deployed through the emergency oxygen masks. The mercenaries, each with strips of white attached to their bodies, don tactical gear and parachutes, then jump out of the plane as it flies directly above Krakoa.

Black Tom notices a streak of light in the sky above and contacts Sage, who tells him the system is registering the object as Domino. Tom rushes to meet Xavier as he returns from Sokovia and tells the Professor that he wants to improve Krakoa’s security. No sooner does Xavier dismiss Tom’s concerns than they hear gunshots. Tom tells Xavier to run.

Chaos breaks out as the mercenaries land on Krakoa and start shooting every mutant in sight. Black Tom, Jean, Wolverine, and Beast race to find Xavier, but one of the mercs finds him first and shoots him in the head. Wolverine goes berserk and attacks the assassin. Beast tries to pull Logan back, telling his friend they need someone alive to interrogate. Sage stares at her monitor in horror, begging Jean to tell her that Xavier is not dead. The three longtime X-Men can only stare in shock at Xavier’s lifeless body and Cerebro - the key to mutant resurrection - in pieces on the ground.

THE HIGH PRICE OF A NEW DAWN!

X-Force is the CIA of the mutant world—one half intelligence branch, one half special ops. Beast, Jean Grey and Sage on one side, Wolverine, Kid Omega and Domino on the other. In a perfect world, there would be no need for an X-Force. We’re not there…yet. 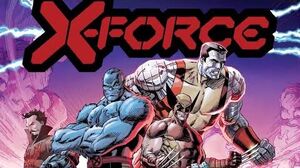