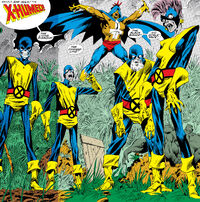 Base of Operations
An unnamed Louisiana swamp
Affiliations

Place of Formation
An unnamed swamp in Louisiana

Place of Defunction
A road in Louisiana

While the other members attacked She-Hulk, Changeling fought against Black Talon's control and tried to free She-Hulk's friend, Louise Mason. She-Hulk thought he was trying to harm her friend, and attacked.

When She-Hulk became distracted, Talon and the X-Humed escaped in a hearse. Still rebelling, Changeling morphed into Elvis Presley to attract the attention of passing police officers. She-Hulk was able to catch up to the hearse and crash it, but was confused about Changeling's actions. He explained Talon couldn't control the four zombies completely at the same time and he was able to try and stop him; he had died a hero and wasn't about to change.

The four were given proper burials, their mouths filled with salt and sewn shut to prevent them from rising as zombies again.[1]

Transportation: The X-Humed briefly escaped in a hearse.

Retrieved from "https://marvel.fandom.com/wiki/X-Humed_(Earth-616)?oldid=4909928"
Community content is available under CC-BY-SA unless otherwise noted.