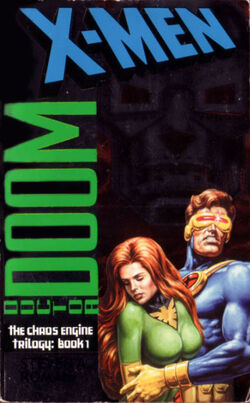 Feared by a world unwilling to accept those who are different. Led by their teacher, Professor Charles Xavier, the X-Men are dedicated to protecting humanity from the forces of chaos, hoping to one day rid the world of an even greater darkness: the prejudice that has made them outcasts. Returning from another dimension, the X-Men discover that Earth is now ruled by one of the most notorious tyrants the world has ever known: Doctor Doom. Far more disturbing than the police state in which they find themselves, however, is the fact that some of the world's greatest Super Heroes, including the X-Men's closest friends, have allied themselves with the legendary villain. Searching for answers, hunted by old enemies and former allies, the mutant adventurers face their greatest challenge: deposing an armor-clad madman with an entire world against them. Standing between them and victory, though, is their deadliest enemy: the malevolent Magneto, who has his own plans for dominating the world.


Novels
Retrieved from "https://marvel.fandom.com/wiki/X-Men:_Chaos_Engine_Vol_1_1?oldid=4330727"
Community content is available under CC-BY-SA unless otherwise noted.