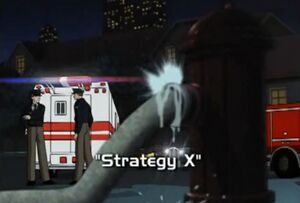 I came back here cause I smelled trouble brewing. Course maybe it was just stink-boy there.

This is the first episode of X-Men: Evolution. At a Bayville High School school football game, Toad (Todd Tolensky) is seen stealing wallets from the spectators. Duncan Matthews notices him and tries to "teach him a lesson" with a few other teammates, when Cyclops (Scott Summers) intervenes. Scott stops Duncan, and Todd runs away. Duncan punches Scott, causing his glasses fall off, in turn causing an accidental laser blast from his eyes which severely damages the school. Later, the police arrive on the scene and, under the influence of telepathy from Charles Xavier conclude that the explosion was caused by a propane leak. Later, Professor Xavier goes to the local train station with Storm (Ororo Munroe) to pick up Nightcrawler (Kurt Wagner), his new student. Meanwhile, Mystique (Raven Darkholme), disguised as the Bayville principal, tells Todd to go to the X-Mansion and collect information about the other mutants. As Todd arrives he crashes into Nightcrawler. They spar, during which Nightcrawler inadvertently teleports them both to the Danger Room, activating the automated defense system and ending the fight. They are rescued by Cyclops, Storm, and Jean Grey. Todd decides that he has had enough and leaves, meeting Wolverine (Logan) on the way out. Cyclops then convinces Nightcrawler to stay and join the team. The episode ends with Todd being chastised by Mystique for his failure, and a brief appearance by Magneto.

The police officer who is at the scene after Cyclops peeks w/out his ruby reds is Scott McNeil ... also Wolverine

When Professor X introduces Scott and Jean to Nightcrawler, there is an 'X' on the ceiling behind Scott.

In the comics Toad's name is Mortimer Toynbee, not Todd Tolensky.

The robe that Nightcrawler is seen wearing is reminescent of the fact that in the comics Kurt Wagner lived as a monk in a monastery.

Retrieved from "https://marvel.fandom.com/wiki/X-Men:_Evolution_Season_1_1?oldid=4309974"
Community content is available under CC-BY-SA unless otherwise noted.