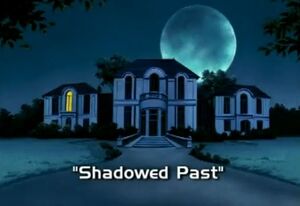 You already know me, son.

Appearing in "Shadowed Past"

Synopsis for "Shadowed Past"

Rogue is having strange dreams about Nightcrawler as a baby, Mystique and Magneto. Professor X scans her mind to find that they're memories Rogue absorbed from Mystique, and understands that Mystique is Nightcrawler's mother. Wolverine checks Magneto's involvement and finds some sort of a genetic laboratory, but Magneto blows it up before they he can find anything and sends the Brotherhood to stop Mystique from telling her son the truth.

In the first scene, Kitty hugs a stuffed dragon. That's a cameo of Lockheed.

In the comics, Mystique's leaving Nightcrawler happened quite different. Magneto had nothing to do with it. When Kurt was born, Mystique was under disguise, but after the people saw her baby they thought he was a demon, and the panic caused her to reveal her true form. She ran away from the angry mob, but her only way out was to morph into a farmer, pretend "he" caught the blue woman and threw her off a cliff, and then tossed the baby from the cliff as well. Kurt was saved and handed to Margali Szardos. Wagner was the name of Mystique's dead husband and not of Kurt's adoptive parents. It is later revealed that someone indeed saw Kurt turning off the image-inducer and teleporting in school: Amanda Sefton. This will lead to them starting to go out in "Shadow Dance". Rogue absorbed Nightcrawler in "Rogue Recruit", and Mystique in "The Turn of the Rogue".

Retrieved from "https://marvel.fandom.com/wiki/X-Men:_Evolution_Season_1_10?oldid=4309904"
Community content is available under CC-BY-SA unless otherwise noted.