"The Cauldron, Part I" 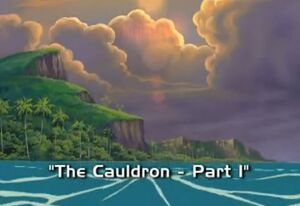 Episode Title
"The Cauldron, Part I"

Your X-Men face a trial by fire. As do my own recruits. Mutant pitted against mutant. One shall lose. One shall win. Only those who emerge victorious shall take their place here on Asteroid M.

Appearing in "The Cauldron, Part I"

Synopsis for "The Cauldron, Part I"

Jean and Scott ride up to the institute in his convertible. He hops out and takes off, Jean calls after him that he's forgotten his homework but he keeps going. She hears a noise in the trees and goes in to search. She finds Toad. He knocks her down with a tree branch and is going to smash her with it. Jean fights back while trying to get him to stop. When he won't she dumps him into a well. A huge silver sphere drops out of the sky and lands nearby. It opens and when Jean leans forward to look inside metal tentacles pull her in. It closes and takes off. Toad climbs out of the well in time to see the sphere fly away. He screams that it should have been him.

In Hawaii a boy named Alex is out lounging on his surfboard in the ocean. A great white comes along and decides to make him lunch. He's knocked off the board and when he tries to climb back on he slips and goes under. The shark makes a run at him and Alex raises his hands in front of him. A blast of energy flies from his hands and hits the shark. When the shark turns and comes at him again he blasts it again, but on purpose this time. He kills the shark and floats to the surface with his hands still glowing.

Back in Hawaii, Alex has climbed up onto the beach. He looks at his hands, then groans and covers his face. Magneto shows up, saying he can help. Alex tells him he doesn't need any help and is leaving when Magneto tells him he can give him answers about what's happening to him, and stop the pain. Alex asks if he's some sort of doctor. Magneto tells him no, he's come to offer sanctuary.

In the hangar Xavier tells Cyke about his brother being alive. Cyke freaks saying he should of looked for him sooner, he shouldn't have believed he was dead. They load up into the Blackbird and leave. Rogue, Kit and Evan come running out as the jet takes off and are upset that they were left behind. Kitty says she wouldn't want a crowd around is she was going to meet a brother she hadn't seen in ten years either. Kurt tells them Hawaii isn't the only place with beaches and they decide to go to a local beach. Kit, Kurt and Evan roll out of the garage in the huge X-tank/hummer and call for Rogue to hurry up. She comes running out of the house saying she couldn't find Jean, so she left her a note. She nearly trips over a cat along the way and shoos it, saying she hates cats. They drive off and the cat morphs into Mystique. She radios to Avalanche saying the plans have changed, that they're on the move.

In Hawaii, the Blackbird lands on the beach. Cyke and Logan get out and find Alex's surfboard. They follow the footprints and Logan says that Magneto has been there. In the jet Xavier tries to telepathically talk to Magneto, the jet is suddenly pulled off the ground. Wolverine runs after it and is able to jump up onto the landing gear. Cyclops is left behind and as he watches the jet disappear Alex comes up behind him. They hug and laugh, then Alex talks to Scott about meeting Magneto. He shows Scott a sphere and tells them Magneto wants to meet with them. He shows Scott his power and tells him he's going and begs Scott to go with him. Scott agrees. They climb into the sphere and it takes off. Wolverine tries to climb up into the blackbird while Magneto and Xavier argue telepathically. Magneto pulls Wolverine off of the jet with his power and dumps him into the ocean. He swims to a nearby island.

At the mansion Storm gets home and runs across the cat on her way upstairs to find the others. Mystique morphs into human form and Storm electrocutes her. The X-kids are ambushed by the brotherhood. They end up crashing into the Blob on the beach. Wolverine makes it to the island and climbs up onto a beach. Sabertooth is waiting for him and they fight.

The Blackbird hovers into Magneto's base in space, Asteroid M. Magneto greets Xavier and tells him that all of the X-Men are facing a "trial by fire". The X-Men and Brotherhood will fight and the winner will win sanctuary on Asteroid M. Xavier tries to talk him out of it, but Magneto won't listen.

Rogue and Kurt tackle Toad and Avalanche. The Blob jumps onto Kitty. She phases out from under him, but passes out. Avalanche tumbles the rocks out from under Kurt. He 'ports but the rocks port with him and crush him on the beach. Quicksilver buries Spyke in the sand. Rogue smashes Toad into the overturned car and is about to absorb his powers. Avalanche stops her and tells her she's won. The Blob points to the four spheres on their way down from the sky and says here comes her reward. Mystique is mad and says she shouldn't even have to prove herself. Storm tells her she doesn't know why she's there and ends up punching her out. Another sphere comes down and takes Storm.

Magneto tells Xavier it's almost over now, and they show Wolverine and Sabertooth fighting as he tells him that they're the only one's left. Magneto asks Xavier to join him and Xavier asks him what happens to those that won't. Magneto shows him Rogue, Jean and Storm in stasis tubes. He tells him that for everyone that he has to force, another recruit comes along willingly. Alex and Scott walk in wearing matching outfits and Xavier looks shocked and says "Scott, No!"

Cerebro was destroyed by Juggernaut during 'Survival of the Fittest'. This new Cerebro looks very much like the movie one – a huge round room with a bridge.

At the beginning of Storm and Mystique's battle, Storm's mouth moves but Mystique's voice speaks.

Retrieved from "https://marvel.fandom.com/wiki/X-Men:_Evolution_Season_1_12?oldid=5243407"
Community content is available under CC-BY-SA unless otherwise noted.