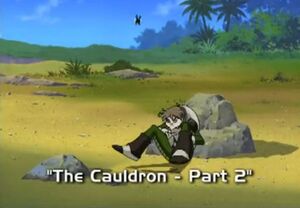 Magneto. One major mega-mutant. He's screening out the best from the worst.

Appearing in "The Cauldron, Part II"

Synopsis for "The Cauldron, Part II"

On the beach Kit, Kurt and Spyke question Toad about what's going on. He mutters to himself about not owing Magneto anything any more. Kit asks who's Magneto and Toad tells them all about Magneto and his plan.

On Asteroid M, Xavier confronts Scott about why he's there. Scott says he's just there to listen. Xavier points to Jean, Rogue, and Storm and asks Scott if they're just there to listen also. Scott gets angry and wants Magneto to let them out. Magneto says he's only being cautious and he'll let them out soon. Xavier tries to talk some sense into Cyke, but Magneto puts him into stasis also. At the last minute Xavier is able to get off a warning to Wolverine, telling him to lose the fight. Scott freaks and is going to blast Xavier out, but Magneto tells him that if he does Xavier will not survive decompression. Scott turns on Magneto, but Alex steps in and tells him that no one should be getting hurt. Scott says he doesn't like it, but does as Alex says anyway.

Back on the island Wolverine and Sabertooth fight. Sabertooth tells Wolverine that "I'm the one that belongs at his side" and Wolverine agrees. He pulls in his claws and lets Sabertooth get in a sucker punch. Wolverine flies off of the cliff and lands on some rocks below. Sabertooth lurks and watches as a sphere flies in. As soon as the sphere takes off, Wolverine jumps up and finds a helicopter .

Back at the mansion the X-Kids are looking for Storm, but they find Mystique instead. Toad taunts Mystiques about being a loser. She roughs him up, as Kurt asks her what she's doing there. She tells them all that no one discards her, and she's planning on paying Magneto a visit. She tells them that they can go together, or she can go alone. Wolverine walks in and says she won't be alone. Mystique tells him that she knows Magneto and she's calling the shots. Wolverine tells her she can get her own ride. She agrees to go along. They take off in the new jet "XM-Velocity".

On Asteroid M, Scott stands alone on a balcony, remembering the plane crash that killed his parents and caused him to lose Alex. Alex walks up behind him and startles him. More flashbacks of the boys jumping from the plane, and Scott's 'chute catching on fire causing him to plummet to the ground. He tells Alex he's sorry for not being there for him, and Alex tells him that it hasn't been so bad. He complains about his joints burning, and Scott asks him how Magneto has promised to help him. Mags comes up behind them and tells them he's going to help them both. He takes them into the Asteroid and shows them a "Gem of Cyttorak" and tells them about the "Genetic Enhancers" he's been able to build using the gems. He claims that the enhancers will fully evolve their mutant powers and put them in total control. He tells Scott he'll let the other X-Men go once Scott has gone through the enhancer. Magneto sends Sabertooth through as a demonstration.

XM-Velocity flies across the surface. Wolverine tells them that there's no metal in the plane.

Sabertooth emerges from the enhancer bigger and more feral. Alex talks Scott into going into the enhancer. Magneto brings the other X-Men out of stasis in time to see Scott enter the enhancer. Xavier tries to stop Scott, but the door slams shut as Scott tries to get out. Scott and Alex come out of the enhancer as adults (both with white hair). Magneto gives Alex the codename Havok and tells Scott he can take off his visor. Then he tells them that the enhancer has affected their minds as well, wiping out emotions.

They pick up an incoming aircraft and Magneto tries to use his powers against it. When he realizes that there's no metal for him to control he sends out Alex and Scott to "defend them". When Alex and Scott blast the Velocity, Wolverine brings it crashing down right on top of them. It skids to a stop in the main chamber, burying the brothers in debris. Kit phases the kids out. Mystique climbs out of the top and heads straight for Magneto. Wolverine releases the other X-Men from the stasis tubes and tells them to all gather at the X-Jet. Xavier send Storm and Rogue to "ready the jet" as he and Jean try to free the brothers from the debris.

X-Kids take on the Brotherhood. Kurt drops the Blob, Kit and Spyke take out Avalanche. Toad helps Mystique against Magneto, but when Magneto flings a machine at her, it knocks her into the enhancer. Magneto goes in after her, trying to stop her from "evolving". Sabertooth in his new "evolved" form beats the stuffing out of Wolverine. Spyke slows down Quicksilver long enough for Rogue to absorb his speed. The way to the X-Jet is blocked and Storm blasts it with lightening over and over trying to clear it. The Blob tells Avalanche to knock off the tremors as the whole asteroid begins to quake. He tells him it's not him and they realize they have to get off quick.

Toad shows up and Avalanche asks him which side he's on. Toad tells him he's on the side that lives. They head for the X-Jet, when they get to Storm and the block, Blob bulldozers his way through. Toad, Avalanche, and Blob head for the jet. Kit and Spyke show up dragging Quicksilver and Storm tells them to get onto the jet. Rogue runs up using Quicksilver's speed to tell Storm that Alex and Scott are still trapped and Wolverine is having trouble with Sabertooth.

Storm goes back and uses a cyclone to slam Sabertooth against a wall and bury him in debris. Jean and Xavier try to free the brothers, but they end up freeing themselves by blasting their way through. They argue with Jean and Xavier. Jean finally tells Scott that if he's the future, she doesn't want anything to with it. She walks away as Xavier tells Scott he just crossed the line and then leaves also.

Mystique emerges from the enhancer looking very much like movie Mystique (scaly, short hair, lots of muscles). Alex and Scott change their minds and make a break for the jet which is already taking off. Tremors break up the ledge their on, and they're dumped off. As they fall they hold hands, and then use their powers to slow their fall and land on the moon's surface. The X-Jet comes back for them, but there are still too many tremors and falling debris and it can't get to them. Asteroid M begins to fall and Alex and Scott use their powers to blast it apart as it crashes towards them. They both collapse to the ground back to normal.

The X-Jet lands and Scott apologizes to everyone for the way he's been acting. The brotherhood stands off to one side and one of them asks what's going to happen to them now. Avalanche says that two spheres left the asteroid right before it blew. He says Mystique is out there somewhere and she'll be back. Alex says so much for Havok, but at least I have my brother back. Xavier tells Alex that they'll help him with his powers if he wants and that they'll do it together, unified, as the X-Men.

In the comics, the Summers plane crash was a little different. Scott and Alex only had one parachute, so they held each other. When their parachute went on fire, Scott manifested his mutant power for the first time and shot an optic blast on the ground, slowing their fall. When they hit the ground, Scott received brain damage that made him lose future control over his optic blasts.

In the comics, the Gem of Cyttorak is the mystical gem that gave the Juggernaut his powers. Since in the show 'Survival of the Fittest' Juggernaut's powers were explained as mutant powers enhanced by mysticism, here the gem is used to enhance other mutant powers as well.

Retrieved from "https://marvel.fandom.com/wiki/X-Men:_Evolution_Season_1_13?oldid=5243408"
Community content is available under CC-BY-SA unless otherwise noted.