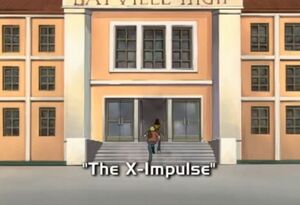 I don't have any gifts, just a curse.

Kitty Pryde's powers manifest, which causes confusion for her and her parents. Lance uses her to help him steal test answers while Jean Grey and the Professor try to help her accept her powers. Meanwhile, Wolverine and Sabretooth battle it out in a parking garage. Nightcrawler and Cyclops, who had been following Wolverine, get involved in the fighting, much to his disliking. In the end, after a climactic confrontation involving Lance and Kitty's parents, Kitty controls her powers to save her parents and decides that she trusts the X-Men.

Retrieved from "https://marvel.fandom.com/wiki/X-Men:_Evolution_Season_1_2?oldid=4607936"
Community content is available under CC-BY-SA unless otherwise noted.