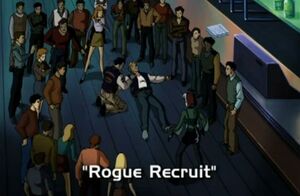 A young girl in Mississippi manifests her mutant power at a high school dance. She accidentally absorbs a football player's memories and becomes upset and confused, and accidentally absorbs the powers of two of the X-Men as well. The X-Men and Mystique both try to get the girl on their side, and Mystique succeeds in the end by using her shapeshifting abilities to make the girl afraid of the X-Men.

At the end of the last scene in the cemetery it's a little difficult to hear what Cyclops is saying. He's incredulously repeating what Kitty has just called Kurt, which was "fuzzy elf".

Retrieved from "https://marvel.fandom.com/wiki/X-Men:_Evolution_Season_1_3?oldid=5515230"
Community content is available under CC-BY-SA unless otherwise noted.