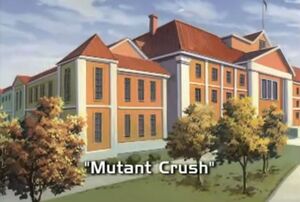 I got too much power even for you. You can't hurt me. I'm the Blob!

Mystique recruits Fred "The Blob" Dukes. At Bayville High Fred develops a crush on Jean Grey, which leads to his kidnapping of her. Meanwhile, Rogue develops a crush on Scott as they are assigned to work on a scene from Shakespeare together. Rogue ends up saving Jean, although she doesn't know why she did.

We find out for the first time that Scott's blond friend's name is Paul.

Retrieved from "https://marvel.fandom.com/wiki/X-Men:_Evolution_Season_1_4?oldid=4608485"
Community content is available under CC-BY-SA unless otherwise noted.