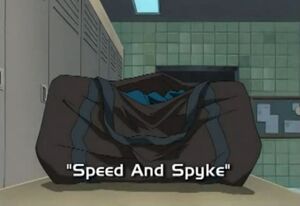 When you're with the X-Men, you're never alone.

Appearing in "Speed and Spyke"

Synopsis for "Speed and Spyke"

Evan and Pietro, long-time rivals, find their rivalry escalated to a new level when they learn that the other is a mutant as well. In their final confrontation, Evan (Spyke) bests Pietro (Quicksilver), with the help of his new friends, the X-Men, who he joins.

Spyke was a character created for the show. A Character bearing an uncanny resembelance to him and his powers was used in the Revamped X-Force series.

The character he most closely represents is the Morlock Marrow, although the creators have said it wasn't an intentional similarity. Since then, however, the character has been given more than a few connections to Marrow.

In the comics, Quicksilver was a member of the Avengers and the Brotherhood.

In the comics, Quicksilver didn't always know he was related to Magneto. In Evolution it seems that no one knows that Pietro is Magneto's son, except for Quicksilver and Magneto, who imply the relationship during the scene in Darkholme's office and the last prison scene.

In the last scene at the pool, the background music is the theme from the original X-men cartoon series which ran during the 90's.

Retrieved from "https://marvel.fandom.com/wiki/X-Men:_Evolution_Season_1_5?oldid=5608759"
Community content is available under CC-BY-SA unless otherwise noted.