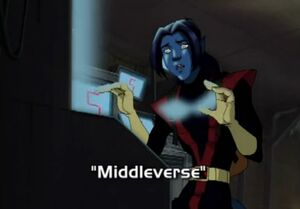 After an argument with Cyclops, Nightcrawler stumbles across an old lab at the school which blows up. He and Rogue discover a device there that causes him to get trapped in an alternate dimension. There he meets Forge, the mutant who had made the device and has been trapped since 1978. The Brotherhood and the X-Men battle over control of the device, which gets destroyed when Nightcrawler and Forge escape back to reality.

Forge is a Native American character from the comics who is known for his mutant ability to create devices. In the comics he had replaced a missing leg and hand with bionic devices, while in the cartoon he can change his arm to a machine and back.

In the first scene Spyke asks for Scott's "Moo juice" (i.e. milk), and Jean gives him hers. Then he steals Kitty's and Kurt's. The creators have said they wanted to show Spyke drinking a lot of milk because of his power, which is growing bony projections from his body.

The Blob calls Scott "Slim" in this episode, which was a nickname the other X-Men gave Scott in the early years of the X-Men.

Errors: During the close-up of the batteries on Forge's gadget right after the portal opens the second of the two batteries is marked with a "-" sign but it should be a "+" sign.

When Rogue watches the X-Men leave Forge's old lab, Cyclops is dressed in his normal clothes while Nightcrawler, Jean, and Kitty are clearly seen wearing their X-Men uniforms. However, by the time they reach the car, all are dressed in their normal clothes.

Retrieved from "https://marvel.fandom.com/wiki/X-Men:_Evolution_Season_1_6?oldid=4309932"
Community content is available under CC-BY-SA unless otherwise noted.