"Turn of the Rogue" 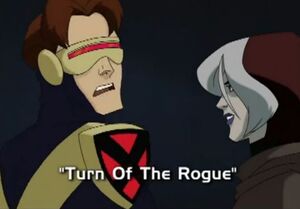 Episode Title
"Turn of the Rogue"

No more secrets! Your powers are mine! Your memories are mine!

Appearing in "Turn of the Rogue"

Synopsis for "Turn of the Rogue"

In the Danger Room, the team trains in the use of their powers. Shockingly, Scott ends the simulation when Xavier surprises them by using Rogue as their target. Going to school, Scott still thinks about Xavier’s deception. Rogue and Scott board a bus heading to a mountain. On their trip the bus is stranded at a cave and the two mutants are forced to face one another. In the cave Scott and Rogue find out that Ms. Darkholme is actually Mystique. Defending one-another from her attack, Wolverine arrives with the Blackbird and rescues them. On the plane Rogue agrees to join the X-Men and Xavier apologizes for his silence, on telling the X-Men about Ms. Darkholme’s true identity.

When the student's teacher tells them that he better not see any "Game Toy" during the trip. the "Game Toy" is a parody of "Game Boy"

Retrieved from "https://marvel.fandom.com/wiki/X-Men:_Evolution_Season_1_7?oldid=5515229"
Community content is available under CC-BY-SA unless otherwise noted.