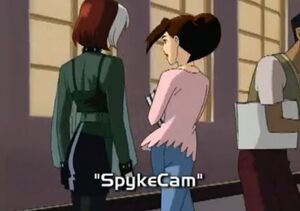 Hey! What are you playin' at Porcupine? I better not see my face on that tape or they're gonna be calling you Spyke-less.

Evan is given an extra credit assignment: to create a film about his 'current events'. He starts off by filming Kitty and Rogue and their efforts to audition for the school play. Sabretooth intercepts Evan's camera and learns Wolverine's whereabouts. He then tries to attack Wolverine at the Institute, but is thwarted. Evan, seeking to make amends, lures Sabretooth away, and with the help of Kitty, Rogue, and Wolverine, defeat him. Sabretooth gets dropped in an arctic wasteland, Evan completes his assignment, and Rogue and Kitty both appear in the school play.

At the start of the episode, Evan is asked to do a report on the Star Wars Program (otherwise known as the Strategic Defense Initiative); however, he mistakenly writes about the movies.

Retrieved from "https://marvel.fandom.com/wiki/X-Men:_Evolution_Season_1_8?oldid=4309915"
Community content is available under CC-BY-SA unless otherwise noted.