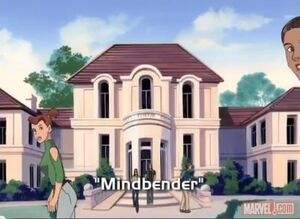 "Understood. I will find them. And the world will once again tremble at the presence of Apocalypse."

Jean dreams that she's being chased through an abandoned carnival by huge freakish scary clowns. She wakes up to realize it was a nightmare, and she's hovering three feet off of the bed. She drops down and hugs her knees to her chest, still shivering from the dream. A jack-in-the-box on her nightstand begins to turn and play music by itself. She lifts the box and sits it on her lap. A tattooed face pops out of the box suddenly and Jean screams. Next morning, all of the X-Men are searching the Institute grounds for her. Xavier and Scott are in her room. Xavier lifts the jack-in-the-box and wonders aloud if it has anything to do with her disappearance. Scott tells him it's just a toy that she won at the carnival they went to last week. Beast comes in to give them the bad news that there's no sign of Jean. Later, Beast is on the computer scanning for news. Xavier comes in to ask if he's found anything. He tells Beast that Cerebro can't pick up any trace of her until she uses her powers.

Scott drives around town in his convertible, calling all of Jean's friends to see if they've seen her. The rest of the X-Kids search Bayville for her. Kit visits the Brotherhood house, but there is an explosion and she phases out of the front door in a hurry. She yells back for Lance to relax, that she hadn't accused them of kidnapping Jean, even though one of them had tried it before. Back at the Institute, Sam (Cannonball), Bobby (Iceman), Ray (Berzerker), and Jubilee head down to the Danger Room. Jubilee asks if they shouldn't be out with the others searching for Jean. Ray says last he heard they were supposed to have a DR session. Sam asks "without an instructor?" and Bobby says that it's never stopped them before. Jamie (Multiple) comes running up behind them trying to catch up. The others tell him that he can't handle the DR and close the door in his face. He walks off mad.

At the train station, Logan finds out that Jean was there, and bought a ticket to Boston. Cerebro is able to detect her in Boston, where she's using her powers. Jean is acting very strangely, almost like she's possessed. She breaks into a museum and steals a ring from one of the display cases. She drops it into a small cloth bag. As she's leaving, two police cars show up to stop her. She waves her hand nonchalantly and the cars go flying one into a tree, the other into a fountain. Back at the Institute Scott is ready to head out to Boston to get her, but Xavier stops him. He says that she's already left, they detected slight traces of her powers near the train tracks. They're going to have to wait until she uses her powers again to find her. In the Danger Room, the New Mutants are having trouble. Bobby gets them to work together and they're finally able to beat the room. Jubilee is pretty roughed up and tries to leave, but the doors have been locked. The room suddenly engages again and the New Mutants back towards the door. Upstairs in the control booth, Jamie laughs evilly to himself as he hacks away at the Danger Room controls. A little while later the Danger Room doors open again, and the New Mutants crawl out looking very disheveled.(Ripped uniforms, messed up hair, generally scorched.) Jamie walks up and asks if they still think the Danger Room was a piece of cake. The others get mad and Ray yells "Let's get him". Jamie takes off running, but the others struggle just to stand and Jubilee says "We'll get him tomorrow". Then they slowly limp off in the other direction.

That night, Jean clears the security and makes her way into the Institute. Scott, who's up late worrying, sees her as she walks past his bedroom. He rushes out to greet her, but she turns on him. He clutches his head, groaning and obviously in pain as she stares at him blankly. Then he collapses unconscious. She uses her TK to put him back to bed, then goes to Kurt's room. Kurt wakes up and looks at Jean. A strange low humming sound is heard, then his eyes glaze over and he takes on the same "possessed" look. Next morning, Scott pounds on Xavier's door to wake him up and tell him that Jean was there, and also that Kurt is now missing. In the computer room, Kit and Beast are busy hacking away at the computers. Kit tells them that she's found a match on her scan, they've been spotted by airport surveillance cameras. Beast finds out that they're headed to NYC. Scott and Logan head out in the X-Jet to get them.

In NYC, Jean and Kurt break into a bank. X picks up their signal and tells Scott and Logan exactly where they are. At the bank Jean and Kurt 'port into the vault and Jean rips open a safety deposit box. Inside there is another ring, that she takes and puts in the bag with the first. Logan and Scott get to the bank and Scott blasts their way into the vault. Jean uses her TK to knock them clear across the bank and through the front windows, dropping them into the street. As they struggle to their feet, they hear the X-jet taking off. Jean and Kurt have stolen it, and left them stranded. Back at the Institute, Beast has been able to find out some info about the rings. Turns out that they are Tibetan artifacts, from the early Han dynasty. Also there are three rings all together. Xavier asks him to find the location of the third ring. Meanwhile, the X-Jet lands on the Institute's front lawn. Jean "possesses" Spyke and Kit. Xavier realizes that Jean is nearby and tries to read her mind. He struggles as he sees the same tattooed face from the jack-in-the-box. Beast tries to get out to stop them, but they've been trapped in the room. Spyke has destroyed the control panel with his spikes. Jean and crew leave in the X-Jet.

Next day, Xavier uses Cerebro to pull the image of the tattooed face from his mind. Rogue tells him she knows who he is, she cranks the jack-in-the-box until the face pops out and tells Xavier that he's Mesmero, and he was a part of the "Circus of Mystery" carnival that they went to last week. Beast bursts in to tell Xavier that the last ring is in a museum in D.C. At the museum, the guards try to stop the X-Kids, but Spyke pins them to the wall. Kurt 'ports in Jean and Spyke. Kit phases in, taking out security cams on her way. As guards start to swarm towards the room, Kit phases through a control panel, closing the metal gates on some of the doors. Jean slams the others shut with her TK, and Spyke wedges them shut with spikes. Kit phases through the glass on a display case and takes the final ring. She hands it to Jean, who in turn drops it into the bag with the other two. They all hold onto Kurt as he 'ports them out and they take off again in the X-Jet.

Beast, Xavier, and Rogue fly to NYC and pick up Scott and Logan. They head off to the Circus of Mystery. The X-Jet arrives first, and the X-Kids make their way to a large tent. The others arrive before they enter, and Xavier tells them to keep them busy while he takes on Mesmero. Rogue doesn't want to fight her friends, Logan tells her no one has to be hurt, they just have to subdue them. Beast and Kurt tussle with each other as Kurt 'ports them all over the carnival. Spyke tries to take out Rogue with his spikes. He corners her next to a trailer, and he almost gets her, but Scott blasts them out of the sky at the last minute. Then he blasts Spyke off of his feet. Jean saves Spyke, then sends Scott flying. He barely misses Logan as he flies across the carnival. Logan senses someone nearby and pops his claws, but when he turns around and it's Kitty phasing up out of the ground he retracts them again. He tells her that he could never hurt her, at which point she kicks him in the shin and phases right through him.

Xavier tries to stop Jean from giving the rings to Mesmero. She lifts him into the sky with her TK. Rogue comes up behind her and grabs her face, they struggle, and as Jean collapses she flings the bag into the opening of the tent. Xavier drops to the ground when Jean passes out. Mesmero emerges from the tent laughing. Xavier says that he was able to take control of the kids, but can he handle Xavier? They have a mental duel, and Mesmero is losing. Suddenly, a strange voice says that Xavier has no idea who he's messing with and Xavier is thrown down. Mesmero returns to the tent, and the other X-Kids regain control. Rogue helps Xavier into his chair, then uses Jean's TK she absorbed to rip the tent to shreds. Mesmero is gone.

Beast asks Xavier if Mesmero hurt him, and Xavier tells them all that it wasn't Mesmero at all. Mesmero was a puppet like Jean, and someone else was in control the whole time. A mind more powerful than any he's encountered. Logan asks what he wanted with the rings and Xavier says he doesn't know. In Tibet, Mesmero sneaks into a hidden temple in the mountains. The place looks ancient. Mesmero reaches into a pillar and pulls out a gold rod. He slides the three rings onto the rod to create a key. In the main wall of the temple there is a huge stone door. He uses the key on the door and a bright light splits the door in two and it starts to slide open. Mesmero is blinded as more light and blue lightening poor from the opening door. When it stops and he looks up, the door has opened all of the way to reveal another huge stone door with a beetle carved on the front. Mesmero: "I have done as commanded. The first door has been opened. I await your instructions on the location of the other two keys." Mesmero groans and gasps as the strange humming noise is heard.

Retrieved from "https://marvel.fandom.com/wiki/X-Men:_Evolution_Season_2_10?oldid=5448021"
Community content is available under CC-BY-SA unless otherwise noted.