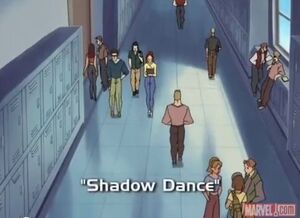 Well, I'd say they were pretty hostile. Wouldn't you?

Early in the morning, Rogue meets Kit on the way down to the Danger Room. Kit yawns as she puts up her hair, and Rogue teases her about being up until 1:30 talking to Lance of the phone. She asks if Kit has asked Lance to the girl's choice dance. Kit says she hasn't that she knows what everyone at the Institute would say. Rogue asks why she cares. Kit tells Rogue that she better hurry and ask Scott, before Jean moves in. Rogue reminds her that the last time she danced with a guy, he almost ended up in a coma. Kit says that Scott knows, and he wouldn't touch her. Rogue is getting pretty upset at this point and says sarcastically that dancing without touching sounds pretty fun. As they get into the elevator, they hear Jean calling out for them to hold the door. She climbs in with them. On the way down, Kit asks why they all have to be at this session if it's just a test for Kurt. Jean starts the routine about knowing their teammates strengths and weaknesses, but midway through Rogue breaks in finishes the sentence. She waves off Jean and stalks out of the elevator. Jean asks Kit what's with Rogue, and Kit explains that she's upset about the dance and the "no touch" thing. Kit asks if Jean is going to the dance with Duncan. Jean tells her that Duncan thinks so, he's even got tickets already. But then she gets this smug look on her face and says that she might just have to disappoint him.

In the Danger Room, Forge is loading Nightcrawler down with equipment. He's running an experiment that should allow Kurt to 'port anywhere on the globe. The device is to slow Kurt down through the alternate dimension through which he 'ports so that Forge can get some info about the other dimension.Kurt ports with the equipment to Forge's old lab at the school. The dimension he goes through is filled with fire and brimstone. Kurt doesn't see them, but there are also strange demon creatures that watch him pass through. He arrives safely in the lab and then ports back to the institute. After he's gone, one of the demons tries to push it's way through a tear in space that Kurt ripped open when he ported. Then it disappears again.Later at school, Kurt tells Jean and Scott about the experience. Jean asks Scott if she can talk to him at lunch then leaves. Kurt says he thinks she's going to ask him to the dance. Scott just says that he's sure she's going with Duncan. He asks Kurt if Amanda has asked him yet. Kurt says he doesn't know if she will, she's so shy, but he's keeping his fingers crossed.

Kit catches up with Lance in the hall. She tells him that she had fun talking to him last night. Lance is playing hard to get though and tells her "yeah, see you around". Kit stops him and asks if he'll go to the dance with her. He tells her that he'll have to think about it. Kit is obviously disappointed and embarrassed. She tells him that she understands and to let her know. She turns and starts to walk away, but Lance stops her before she gets very far and tells her he thought about it and the answer is yes. Kit smiles and walks away. Lance smiles and says "alright!". Unfortunately he gets a little too excited and sets off some tremors by mistake. Kit looks back and Lance smiles sheepishly.In Kurt's class, Amanda keeps smiling and watching him wistfully. After class she asks him to go to the dance. Both are stuttering and painfully shy about the whole thing. He agrees. She tells him that she'll call him later.At the institute, Forge, Xavier and Wolverine are examining the data from Kurt's experiment. They discover the demons in the other realm. Forge says that Kurt will have to port again so they can get more information. Wolverine volunteers to go along so Kurt will be safe.

At lunch, Kurt talks to Scott and Evan about his date. They decide that Kurt will have to wear gloves so that Amanda can't feel his fuzzy fingers. Just as Jean is walking towards their table to talk to Scott, Taryn pops out of nowhere and asks Scott to the dance. Jean looks majorly embarrassed and rushes off. Scott looks pretty disappointed, but tells Taryn yes. At another table, Risty tells Rogue that she's lost her shot at Scott. Rogue tells her that she wasn't going anyway. Risty asks Rogue to go with her, but Rogue says she doesn't want to look like a loser. Risty finally talks her into it. After school, Taryn is talking to her friends about going to the dance with Scott. They reach Jean just as she's getting into Dunc's car. Taryn says Hi to Jean, but Jean gives her the deep freeze and leaves. Taryn and her friends all laugh saying she's so jealous. Taryn says that Jean had plenty of shots at Scott and now she's lost her chance, all the while looking majorly catty.At the Brotherhood house, everyone is making fun of Lance. The Blob says he wouldn't be caught dead at the dance, and Tab tells him that it's a shame cause she was going to ask him. Tab, Toad, and Blob all decide to go together and Quicksilver calls them pathetic. Tab asks if he thinks he's too good for her and he tells her he could keep four girls busy. Now everyone is excited about going to the dance and Lance just sits back and smiles to himself.

At the institute, Kurt and Wolverine do the experiment again. But this time they are attacked by the demons. They just do make it out thanks to Wolverine and once they get to the lab Kurt freaks out and says that he'll never port again. Xavier and Forge have to come pick them up. Wolverine asks about the demons following them through. Forge says not unless Kurt's gates don't fully close, which probably wouldn't happen since it had never happened before.At the school dance, Kit and Lance, Scott and Taryn are dancing. Tab, Toad and Blob show up together. Quicksilver arrives with four dates all at once. A slow dance comes up and Amanda and Kurt dance together looking pretty happy. Jean is standing alone on the sidelines giving Duncan evil looks as he goofs off with his friends by the refreshment tables. She watches Scott and Taryn wistfully. Risty shows up and tells her she looks like she'd rather be with Scott. Jean tells her that at least Scott would dance with her. Risty sees Rogue and leaves Jean alone again.In the lab, a demon is finally able to force it's way through a rip. At the dance, Amanda tells Kurt that she knows about him being different. Kurt tries to laugh it off, but Amanda tells him she's willing to wait until he's ready to tell her.Back at the institute, Forge and Xavier are packing up equipment. Another demon makes it's way thorough a rift in the Danger Room below.At the school, Blob and Toad wait for Tab outside of the bathrooms. One of the demons show up and Toad screams like a girl. They are backing away in terror as Tab comes out. She turns and the demon lunges at her.

In the auditorium, Lance asks Kit if it's so bad being with him. Kitty smiles and shakes her head no. Another rift begins to open between them and a demon pops out. Rogue and Risty run. Scott blasts one and Jean beats another senseless with her TK. Lance protects Kit as another demon tries to attack them. Amanda begs Kurt to port them away and he finally does as a demon lunges for them. Kids are streaming out of the school in a panic as Xavier, Forge and Wolverine arrive.Rogue and Risty run into another demon that has some students cornered. Rogue tries to help them by baiting the demon. As it comes towards her she takes off a glove, but Risty blasts it with a fire extinguisher and they both take off running. As it's closing in on Rogue, the others arrive and Forge blasts it with the ray. They head off to search for any other demons. Risty asks Rogue about Forge as the others run off. They find Blob, Tab, and Toad. Blob is literally sitting on the demon that attacked them. Forge blasts it back too. The X-Men head off looking for more demons, as the Brotherhood stand behind and watch them leave. Outside, Amanda and Kurt are walking home. She tells him how she saw him change at school one day and port away. She asks if she can see the real him now. He turns off his image inducer reluctantly. She rubs his face and says blue is her favorite color. They head off to the ice cream shop together.

Retrieved from "https://marvel.fandom.com/wiki/X-Men:_Evolution_Season_2_11?oldid=5315323"
Community content is available under CC-BY-SA unless otherwise noted.