"A Walk on the Wild Side" 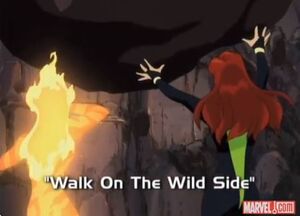 Episode Title
"A Walk on the Wild Side"

Scott, I was trying to teach Magma how to handle things that go wrong. Which does not include "Looking for a big strong man to save you"!

Appearing in "A Walk on the Wild Side"

Synopsis for "A Walk on the Wild Side"

Jean is running Magma though a training session. Magma keeps telling Jean that she isn't ready for it, but Jean keeps going. Cyclops shows up to tell them that the Prof doesn't want Amara to be late for her first day of high school. Jean says that she's got it covered. A boulder breaks free from the training ground and Jean tells Amara to melt it back into place. She tries, but misses. Jean catches it with her Telekinesis right above the girls' heads, but Scott decides to play hero and blasts it into pieces, showering the girls with debris.

Jean "lifts" them out of the simulator and is understandably mad at Scott. He tells them it was a good thing he was there to "rescue the damsels in distress". Now both girls are down right mad. He follows them down the hallway, where Jean finally blows up and tells him that she was teaching Amara how to handle things when they go wrong, "which doesn't include looking for a big strong man to save you". Jean and Amara both stalk off, leaving Scott standing in the hallway.

At the Brotherhood house, Tab blasts down the bathroom door. Toad peaks out from behind the shower curtains, complaining about not getting any privacy during his one shower a month. She uses his mouthwash and then throws a bomb in the shower with him, blasting out water and all. On the stairs she tells Blob that his Mohawk is outdated, then she proceeds to steel Lance's Jeep and head off to school.

At school, Kit is showing Amara to her first class, which she happens to have with Tabitha. Tab asks her about life with the "geek squad" and Amara tells her how Jean is always pushing her too hard. Tab tells her she doesn't have to take it and asks if she wants to go to the mall with her after school. Amara agrees. After school, Jean sees the two of them driving off in Lance's Jeep. She asks Scott to borrow his car to stop them. Scott jumps in and says he'll do it. When Jean becomes angry, he tries to apologize. She tells him that she's tired of always being treated like the "weaker sex". Duncan shows up saying he's got them tickets to the Sadie Hawkins Dance. Jean blows up, snatches Scott's keys and stalks off. Duncan says that he's glad she took Scott's keys.

On the way to the mall, Tab and Amara witness a car-jacking. They chase after the criminals. Jean finds them along the way and manages to stop the car-jackers from running over two innocent bystanders. The chase then continues and Amara melts the tires of the jacker's car. Tab throws a bomb in the rear window and the criminals bail right before the car explodes. They take off running, but Jean traps them with cinder blocks. The girls celebrate and then take off when they hear the police coming.

The whole incident is on the news later that night, and Jean and Amara decide to keep it a secret. A strange rock video like montage follows with the girls shopping, then dancing, then doing some vigilante crime fighting, more dancing, Kit and Rogue join the group, the girls all change into new costumes, then even more dancing, some more crime fighting, and finally Risty watching them covertly and looking none to happy about the whole thing. A news cast tells about the new "Bayville Sirens", and how they've cut the crime rate in half. Scott watches suspiciously.

Back at the Brotherhood house, Tabitha busts in on Toad in the bathroom again. He tells her he's going to buy her some mouthwash. The Blob catches her on the stairs and yells at her for shaving his head during the night. She heads downstairs and steals Lance's Jeep again.

At the institute, Kurt and Scott wait outside in Scott's car. They spy on the girls as they sneak out of the mansion, but they really aren't very good at it and Jean spots them right away. Tab picks them up in the Jeep and the boys try to follow them. Kit phases the Jeep through a train and they lose the boys. Later they see another car being stolen and give chase. The owner of the car calls up the cops on his cell and tells them that his car's been stolen and the Sirens are already on the job.

The girls track the car to a warehouse, where they get caught spying on a ring of car thieves. Seems the whole thing was a set-up by the ring to try and catch the Sirens (they've been cutting into their business). The girls beat up the crooks in a Charlie's Angel like fight scene. Tab gets a little too excited with her blasts and starts multiple fires. Kurt and Scott hear the explosions and find the girls, but they wait it out on a catwalk above the fight. Scott wants to "let the girls handle it". Kit and Amara trap the ring leader in the trunk of a car. Scott saves him at the last minute as the car is about to be engulfed in flames. He tells Kurt that he "never saw that".

The girls round up all of the crooks and put out the fires. A policewoman surprises them and tells them they're all under arrest. Tab wants to fight, but Jean stops her. The police woman agrees to let them go if they stop the vigilante routine. They agree and take off right before the rest of the police arrive. The police woman wonders off through the smoke and morphs into none other than Mystique.

Later that night in the Institute kitchen, Jean and Scott talk about the girls being the Sirens. Jean tells him it was nice to be able to help other people and she hopes that someday they can do it out in the open.

Retrieved from "https://marvel.fandom.com/wiki/X-Men:_Evolution_Season_2_13?oldid=4608496"
Community content is available under CC-BY-SA unless otherwise noted.