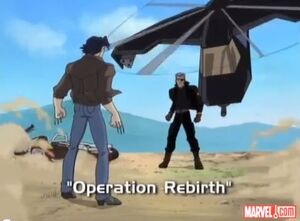 The percentage of the population possessing the X-gene is increasing exponentially. It's becoming difficult to keep track of them, even with Cerebro's recent enhancements.

Wolverine is being chased through the woods on his motorcycle by a military like group. He ends up cornered on a cliff. Nick Fury shows up in a helicopter and calls Logan "Weapon X". Wolverine tells him "Goodbye" and that he doesn't work for S.H.I.E.L.D. any more. Fury won't let him leave and Wolverine gets mad. He asks Fury what he wants. Fury tells him that "Rebirth" has been stolen. Wolverine tells him that it's impossible that Rebirth was destroyed. Fury tells him that there was a second one, a back up. S.H.I.E.L.D. is unsure who took it, but there were magnetic pulses that bent metal. Of course Wolverine knows it's Magneto right away. At school, Kurt and Rogue are hassled by a big thug that breaks Kurt's image inducer. The guy freaks out, but Jean comes up just in time to wipe his mind and send him packing. Kurt is really upset about the whole incident and 'ports away.

At the Institute, Wolverine tells Xavier about Rebirth. A machine created to "enhance" humans and create super soldiers during World War II. It was only used on one man, Steve Rogers. A flashback shows Rogers during the Rebirth experiment and then later as Captain America fighting in the war. A younger Wolverine meets Cap. America for the first time. Xavier interrupts to say that he didn't realize that Logan was that old. Wolverine goes on to tell him that Rebirth ended up destroying Rogers and now he believes that Magneto has it.

Xavier tries to find Magneto using Cerebro, but fails. Tons of other mutant signatures turn up though and the two talk about a massive mutant population boom. Kurt and Rogue are eavesdropping and get caught. Rogue tells them that she remembers some info that she drained from Magneto in New York (during "On Angel's Wings) and she thinks that he's hiding out at a base in the Sahara Desert. So Wolverine, Kurt and Rogue head out to the Desert.

On route, Wolverine has another flashback to World War II. He's teamed up with Cap. America on a mission to free some POW's. The mission is successful and the boy that Cap carries out of the camp uses his mutant powers to deflect some bombs that come hurling towards them. Wolverine asks the boy what his name is and he tells him that it's Erik Lehnsherr.

Back in the present, Kurt asks Wolverine why there was only one super soldier created using Rebirth and Logan tells him that the process actually caused a cellular breakdown that was killing Captain America. In another flashback Wolverine and Captain America destroy Rebirth to keep anyone else from suffering. The team gets to Magneto's base and find someone inside the second Rebirth machine. Sabertooth attacks Wolverine and Kurt and Rogue try to get to the machine to destroy it. Both of them are trapped by steel beams while Sabertooth and Wolverine continue to do major property damage going at each other. Kurt 'ports to Rebirth and is about to set the bomb when Magneto calls out to him from the chamber.

Magneto tells Kurt that he's using Rebirth to replenish himself, that without it he's going to die and if Kurt blows up the controls he will be killing Magneto. He asks Kurt if he's that much like his mother. Kurt is unable to blow up the machine and Magneto turns young again as Rebirth rebuilds his cells. Turns out Rebirth doesn't harm mutants the way it does humans.

Wolverine is finally able to knock-out Sabertooth and pulls Magneto from Rebirth. He arms the detonator and Rebirth explodes. Magneto is furious and creates a huge metal monster that attacks the X-men. He decides in the end to release them though, because Kurt spared his life. Later Wolverine visits Captain America alone. Cap is encased in a cryogenic chamber, waiting for them to find a cure to the damage done by Rebirth. Fury comes in and tells him it's time to go and to remember that he was never there.

Retrieved from "https://marvel.fandom.com/wiki/X-Men:_Evolution_Season_2_14?oldid=5314808"
Community content is available under CC-BY-SA unless otherwise noted.