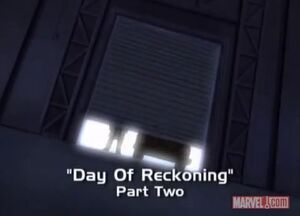 He released the Sentinel.

The Sentinel shuts down and the scientist all rush in. Trask tells them to cage the mutant (Wolverine) and to run a full diagnosis on the Sentinel. He wants to find out how well it stood up to the experiment, and then he wants to try it all again. At the Institute, the New Mutants continue to run from the mansion's defenses. Boom Boom, Magma, and Cyclops get in by the back way, Magma blasts a tunnel into the caves beneath the institute. They make their way past the defenses up to the control room.The X-Men and Brotherhood teams have split up into groups and are searching the area around the warehouses (where they picked up Wolverine's signal). They find Magneto's travel spheres, but they're empty and there is no sight of Magneto's crew anywhere. Gambit ambushes one of the teams by throwing in one of his cards. The second team sees the explosion from over the top of some of the buildings. Avalanche says "Finally, some action." Quicksilver tells them they have no idea and runs off. Wanda realizes it's all a trap, but it's too late. Magneto begins ripping the place apart (all from out of sight), and finally pulls apart one of the warehouses to reveal his new crew (Sabertooth, Gambit, Colossus, and Pyro).

Gambit starts throwing cards everywhere and the teams scatter. Sabertooth jumps Beast. Pyro chases after some of the X-Kids, but Storm sends some rain after him and puts out all of his flames. Then she hits him with some lightening and fries his flame thrower. Beast and Sabertooth fight and jump up into some scaffolding/building frames. Magneto wraps a girder around Beast and traps him. The Scarlet Witch starts searching the roof tops trying to find Magneto, but so far still no sign of him.At the institute, the New Mutants turn to Cyclops for leadership. Cyke tells them it's too late to shut down the self destruct and tells them to follow him. They all take off running. The Institute is shown from the outside and it explodes with the kids still inside.

Back in Trask's lab, they pick up the X-Men/Brotherhood/Magneto fight going on right above their heads. Trask tells them that he wants the Sentinel back online immediately. Above ground, Rogue runs into Gambit. She acts stunned, and stands there looking all sappy as he hands her a card and charges it. He jumps away and she finally looks down at the card, realizing what's about to happen, she tries to fling the card away at the last second. It explodes close by. Colossus and Toad fight. Colossus tries to squash Toad by throwing various large objects at him, but he misses each time. Finally Toad tries to body slam Colossus, but he doesn't even faze him and Colossus pulls him up by his collar. The Blob comes to the rescue and as he charges Colossus, Colossus flings Toad away. The two collide and Colossus is sent sailing into the side of a building. Kitty phases out of the wall nearby and phases Colossus to drag him into the building. She phases free of the building and tells Avalanche to let 'er rip. Avalanche drops the building on Colossus.

Sabertooth is finally able to knock out Beast. As he's getting ready to drop a dumpster on him, Rogue rushes in and absorbs Beast's powers. She uses them to knock Sabertooth down. Meanwhile Wanda continues to search for her father. She starts to wander off and the ground and buildings around her begin to shiver and warp. Storm follows her and sees that Wanda is headed for Magneto, who's perched up on top of a building in the distance. Storm calls the teams together to go after Magneto.

Quicksilver lets Magneto know that Wanda and the teams are after him. Magneto drops the ground out from under the teams and they end up right in the middle of Trask's compound. Trask sends the Sentinel after them. Quicksilver runs recognizance and lets Magneto know that Trask has released the Sentinel. Magneto tells him that he knew he would. Magneto's crew (except for Mags and Quicksilver) load back up into the travel spheres and take off. Magneto tells Quicksilver that the whole world will now know about mutants. He uses his powers to lift the teams and the Sentinel back up to ground level again.The Sentinel goes after the teams and everyone scatters. A news traffic helicopter that's close by happens on to the site and witnesses the fight. Storm tries to take out the Sentinel with lightening, but the Sentinel just keeps coming. The news chopper goes to live feed. Storm is hit and goes down. Spyke steps up to attack the Sentinel and protect Storm. The rest of the team joins in. Blob lifts a car and throws it, Jean uses her TK to amplify the force of the throw and slam it into the Sentinel. Lance crumbles the ground beneath it, all the while the news chopper is broadcasting. Duncan, Taryn, Amanda, Kelly and others all see the X-Men on the television fighting the Sentinel.

The police finally show up on the scene. Blob and Spyke are both caught by the Sentinel. It shoots this green gel like substance on them that solidifies and freezes them in stasis. Storm gets up and is really mad. She brings up a full strength gale and sends it against the Sentinel. The Sentinel activates thrusters and is able to fly free from the gale. It slams into the ground and almost crushes Rogue and Kitty. It hits them both with the stasis goo, but Kitty is able to phase free and run away.The Beast is the next to be captured, and the Sentinel is close on the tail of Kurt and Toad but they're able to get away. The Marines arrive in choppers, but Magneto uses his powers to hold them back and out of the fight. Kurt ports into one of the choppers and snatches a grenade. He jams it into the Sentinels armor and ports away. There's an explosion and the Sentinel collapses against a near by building. It's damaged, but still moving. It locks in on Magneto on the roof tops.

Wanda surprises Quicksilver and takes him out. Then she goes after Magneto and uses her powers to block his powers. The Sentinel comes after Magneto and he begs Wanda to release him. Xavier shows up in the X-Jet and attacks the Sentinel, but Wanda hexes the Jet and sends it flying. It draws enough of her power away that Magneto is freed. He regains his powers just in time to send two missiles right back at the Sentinel. The missiles hit and the Sentinel explodes. It comes crashing down right on top of the building and Magneto.Wanda is thrown from the roof and Nightcrawler ports her to safety. The survivors regroup and Xavier picks them up in the X-Jet. The kids want to save the others, but Xavier tells him they'll have to come back for them. They fly home, but when they arrive, they see that the Institute has been totaled. They land and Jean starts calling out for Scott and the New Mutants. Everyone is in total shock.Scott and the New Mutants come out of the surrounding woods looking the worse for wear. Jean rushes up to Scott and hugs him, but he flings off her arms and goes for Xavier. Sam tells them that they were able to make it into Cerebro and that it was just able to sustain the blast. Scott jumps Xavier and yanks him out of his chair yelling, saying it's all his fault. He throws Xavier to the ground and Kurt and Bobby pull him away. Xavier stands and morphs into Mystique. She tells them that she was responsible for everything, and now it's about to get much worse.

Retrieved from "https://marvel.fandom.com/wiki/X-Men:_Evolution_Season_2_17?oldid=5225065"
Community content is available under CC-BY-SA unless otherwise noted.