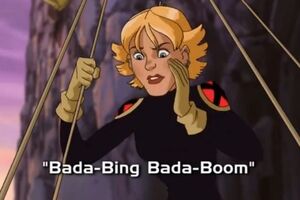 Yeah! Look out below. Boom Boom is bombin' in. Whoohooo

X-Men are training out on some cliffs. Kurt is playing the victim and Boom Boom is supposed to go down on a stretcher and save him. She rides down acting really careless and blasts apart the rocks that Kurt is "trapped" under by creating a "bomb", which is her mutant power. She kicks him onto the stretcher and makes some jokes about Kurt's codename. Tells him he should change it to "Wild Blue Yonder Boy".The stretcher starts up, but Kurt falls out. He ports back up saying she just lost 10 points because she forgot to strap him in. She starts rocking the stretcher and flinging "bombs". Wolverine yells down for them to cut it out, but the stretcher slams into the cliff wall. Kurt is knocked unconscious and falls. Scott blasts away the rocks below and Kurt falls into the ocean. Wolverine dives from the top of the cliff and saves him.

Back at the institute, Xavier lectures Kurt and Tabitha. He puts them both on restrictions for 2 weeks, which includes being grounded, no powers, and 2 sessions with Logan daily. Tabitha is about to say something, but Kurt stops her and tells Xavier that they understand.

Over at the Brotherhood house, which is a total wreck, Toad is in the kitchen eating flies. Quicksilver rushes in and checks all of the cabinets and complains about the "bare cupboards". Toad tells him they need money and he knows where to get it. He heads upstairs only to slam into something and come tumbling down the stairs again.We find out he's trying to break down Mystique's door. He does this 2-3 more times before Blob stops him and Quicksilver asks what would happen when Mystique comes back and they've broken into her room. Toad says she's not coming back and Blob flings him against a wall. Lance calls them "Einsteins" and tells them that he'll be at school. Toad says me too, for my own safety.

At school, Kelly makes an announcement about a fund raising carnival that's being held to raise money for a new gym. In the office he tells the secretary to pick up the proceeds every hour and deposit them in the office safe. They turn around to find a man that's been standing there listening. He tells the secretary that he's there to see Tabitha Smith, his daughter. She checks the files and tells him that Tabby has a restricted visitor list and he'll have to check with the Xavier Institute. He says thanks and leaves.

In the school, Tabitha can't get her locker open, so she "booms" it open. Then she realizes that it's not her locker at all. Kurt comes up behind her and says that she's not supposed to be using her powers. They argue over Xavier's punishment. Then she snatches his "burger bomb" and his social studies book and takes off. Kurt stands there with a sappy look on his face until Evan shows up to tell him he's late for chemistry.

Tabitha runs into her father in the hallway and asks what he's doing there. He tells her that it took him 2 months, but he's finally tracked her down. She tells him to leave her alone and starts to walk off. He tells her that her mom and him are trying to work things out and that they can't do it without her. She says "try" and leaves.

At lunch, Jean is sitting with Duncan and his friends at a table. Scott and Kurt are sitting together talking about the carnival. Kurt asks if Scott is taking anyone and he glances wistfully at Jean with Duncan and says doubtful. Kurt sees Tab and calls her over. She gives him back his book, but then tries to snatch his drink. He stops her and tells her there's a drink machine around the corner. She calls him stingy and walks off saying see you around. Kurt sits there looking at his book, which Tab has doodled all over, with that same sappy look he had earlier. Scott reminds him that she almost got him killed earlier and warns him to be careful around her.

Tab runs into Lance at the soda machines. He rumbles the machine to get a free soda. Tab says nice technique, then places a bomb in the machine. It explodes and money and sodas fly everywhere. She grabs a soda and asks Lance what he thinks of her technique. He tells her that she'd fit right in with the Brotherhood. She laughs and says as if she'd want to and leaves.

At the X-Institute, Xavier is telling Tab's father that he can't see her. Her dad grabs Xavier and threatens to bring in the media and tell them all about what's going on at the Institute when Wolverine shows up. He tells her dad that he's going to remove his hands. Just then Tab and Kurt walk in. Tab and her dad argue in the library. He wants her to help him steal some money. She finally agrees to it, but only if he'll leave and never come back. They agree to meet at the school carnival that night.

Later Tab talks Kurt into 'porting her over to the carnival. They pull all sorts of pranks, with Tabby dropping "bombs" and Kurt 'porting them away before they go off. Finally they blast Blob's hot dog. Lance and Blob catch site of Tab and Kurt and follow them. On the Ferris wheel, Scott is sitting alone. Taryn Fujioka walks up and asks if she can ride with him. He asks what happened to Jean, he thought they came together and she tells him Jean's with Duncan and 3's a crowd. Jean and Duncan wonder up and Jean sees Taryn and Scott together and acts a little jealous. From the top of the wheel Scott catches sight of Tab and Kurt 'porting around.

Tab sees her father and tells Kurt to meet her in the arcade. He tells her that they need to leave that they're going to get in trouble and she tells him that she needs five more minutes. Tab's dad wants her to help him break into the office and get the carnival proceeds. She finally agrees and they head out, but Blob and Lance had been listening in and Lance says that they're financial troubles are about to be over.

Kurt comes out in time to see Tab and her father walking towards the school. He finds Scott and they both go to find the other X-kids and help Tab. After Tab and her father take the money the Brotherhood ambush them. Toad takes off with the money and they end up in the condemned gym. The X-Kids show up and a fight breaks out. Tab's dad manages to get a hold of the money again during the ruckus and heads up to the roof. Tabitha follows him, but the roof begins to cave in on him and he drops the money. She tries to get him to reach for her, but he just keeps trying to get a hold of the money again. Finally the whole roof gives way and they both fall. Kurt 'ports them to safety, but her dad knocks him down and tries to run with the money. Tab follows him, but they're both stopped outside by the police.

Kurt and Xavier show up at the police station later to get Tab out. Her father was wanted on outstanding warrants and won't be getting out for awhile. Tab tells Xavier that she'll get her things and go. That the X-Men aren't a good fit for her right now. Xavier tells her that she's welcome back if she changes her mind. She leaves.

She shows up at the Brotherhood house and pretty much forces her way in. She wanders upstairs to find a room and "booms" down Mystique's door. Inside it seems that Mystique had the only room in the house that isn't ready to be condemned. The Brotherhood are all standing in the doorway gawking and she tells them to stay out of her room and slams the door in their faces.

At the institute, Kurt's been put on probation for a month. He talks to Scott about Tab leaving and how he doesn't think she'll be coming back.

Retrieved from "https://marvel.fandom.com/wiki/X-Men:_Evolution_Season_2_3?oldid=5177640"
Community content is available under CC-BY-SA unless otherwise noted.